You are here: Home › Woman Cries Out In Pain As Drug Cartels Slowly Dismember Her Alive Before Beheading Her On Video 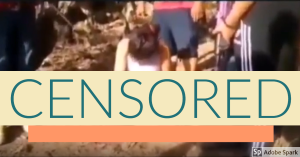 While the world is filled with great concern about the spread of the COVID-19 coronavirus, economic collapse, and the future US election, there are a lot of suffering people in many places. The people of Mexico have been suffering for a long time under the horrible yoke of drug cartels, whose violence is inhuman and are a major reason for people to attempt to migrate to the US, for they fear for their lives, their families’ lives, and they know they do not have a future in a place where such terrible things take place on a regular basis. According to Blog del Narco, a recent cartel video was released showing a woman who was slowly dismembered alive before she was beheaded.

The assassins of the CDS do not specify which criminal organization his victim belonged to, they only mention that he is part of “the counter” while indicating that this happened because he was “filthy” referring precisely to the fact that he is part of another criminal group. It was through social networks that hitmen from the CDS.

They released at least four videos where you can see all the massacre committed against the woman, because they decide to dismember her while she is still alive. It is important to indicate that the images are too strong and can hurt the sensitivity of some people, therefore we recommend discretion.

In the recordings, it can be seen how little by little assassins from the Sinaloa Cartel are killing the woman’s life and dismembering her, first it is observed how they remove her arms, later they cut her neck and thus continue with the other extremities.

In the videos published on social networks you can hear the woman’s screams of pain, while the Sinaloa Cartel hitmen do not show any kind of compassion for her and continue to dismember, without even giving her the opportunity to defend herself or run for her life, because it was tied.

So far, the victim has not been identified and his remains have not yet been located, however, due to the words spoken by the Sinaloa Cartel hitmen in the videos, it is speculated that he could be part of the CJNG, criminal groups that usually operate in the zone. (source)

The horrible video is below to watch

(WARNING: VERY GRAPHIC VIDEO. NOT SAFE FOR CHILDREN. YOU HAVE BEEN WARNED.)

This is why people migrate. If somebody had a chance to risk everything to come to the US if it meant getting away from these kinds of things, who would not take it while it was possible?

Let this video always be a reminder to show compassion to others, to remember that many people suffer, and that many crises- such as the current situation with migration in the US -are rooted in real causes that often are of concern to all people.