You are here: Home › Trump Blames His Failing Presidential Campaign On “Woke Jared” 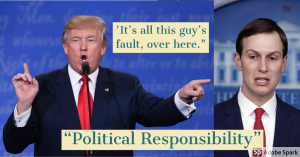 President Trump presented himself for decades as a successful businessman who possesses a superior intellect and incredible negotiating skills, not to mention an above-average acumen for understanding the difficulties and complexities of life. However, the reality has been the opposite, which is that he is just a rich playboy who uses government bailouts to cover his bad investments while indulging in pay-for-play fornication with his money earned not from business, but a combination of inheritance and as an actor.

Having noted this, President Trump has attempted to shift the blame of his failing campaign to his son-in-law Jared Kushner, saying in a report from New York Magazine that “woke Jared” is the reason he is failing.

The good news for President Trump’s campaign is that the candidate seems to be finally moving out of the denial stage and recognizing that he is losing to Joe Biden. Trump “has privately come to that grim realization in recent days,” multiple sources have told Politico.

The bad news is that Trump’s diagnosis of the problem seems to be somewhat underpowered. Jonathan Swan reports that Trump is blaming his predicament on bad advice from Jared Kushner. And while disregarding advice from Kushner is a generally sound principle, in this case, Kushner’s strategy made some sense. Trump regrets having followed the Kushner-led ploy of trying to appeal to Black voters. “One person who spoke with the president interpreted his thinking this way: “No more of Jared’s woke shit,” reports Swan.

The “woke shit” consisted of a series of high-profile, relatively symbolic measures, like touting funding for HBCUs, and a handful of clemency measures. Trump’s campaign spent $10 million on a Super Bowl ad highlighting his commutation of a sentence for nonviolent drug offender Alice Johnson. In the wake of George Floyd’s death, Trump’s immediate response was empathetic, if not terribly articulate: “I feel very, very badly. That’s a very shocking sight … That was a very, very bad thing that I saw. I saw it last night and I didn’t like it … what I saw was not good. Very bad.”

The concept of repositioning himself to the left on race is — or, at least, was — perfectly sensible. Even incremental reductions in the Democratic vote share among African-Americans would be potentially decisive in states like Florida, Pennsylvania, and Michigan. Joe Biden does have historical baggage with his own base — and while it may be incoherent for the man who demanded the execution of innocent teens to attack Biden from the left on criminal justice, successful political attacks don’t always require coherence. What’s more, detoxifying his racist image is helpful and probably necessary for Trump to regain his standing with some of his wavering white supporters.

The problem is that Trump’s pivot to the center on race nearly coincided with the onset of the coronavirus and then the Floyd murder, both of which Trump has bungled catastrophically. Trump has naturally blamed his polling plunge not on his mismanagement of either crisis but on the strategy his son-in-law foisted upon him.

So Trump has pivoted back to raw white racial grievance. He is retweeting video of random Black people attacking white people, urging New York police to (illegally) remove a “Black Lives Matter” sign — which he calls a “symbol of hate” — and threatening to veto a bipartisan defense-authorization bill because it would rename military bases that currently honor Confederate leaders.

Trump reportedly believes this message will activate a “silent majority” that may have previously hesitated to vote for him because he had grown too anti-racist. But there is no evidence in public polling that Trump has any advantage to mobilize. Strong and growing majorities see racism and police mistreatment of Black people as serious problems. And while defunding the police may be unpopular, Biden is proposing to increase funding for police in support of reform efforts.

Trump learned the value of white racial backlash early on. He is an old man who resists changing his mind on anything, and surrounds himself with people who entrench his prejudices rather than challenge them. His modest, aborted outreach to Black voters represented one of the few exceptions to the pattern of rigidity. As he is failing, he is responding in the way ossified thinkers do: by turning back to what he has always wanted to do. (source)

Now it is fair to say that Jared Kushner gives the impression for many as one who is a worm, weasel, generally repulsive, and deceitful, as his actions, words, and gestures all indicate such. However, Trump is the President- not Jared -and if Trump were truly such an intelligent businessman who is seeking the good will of the country, he would treat Jared and his “friends” the same way that Trump treats real US allies and potential friends.

Jared is awful, but the people did not vote for President Jared. They voted for President Trump. They want Trump to do what he promised, which is to take charge and deal with national problems. Trump is not doing this, and this is the reason why 2020 make a geriatric shuffleboard contest more exciting than the elections, because there is nothing. It is entirely a joke.

Most people don’t want stupid racial punditry, sharp words on Twitter, or high-school level bantering while their families suffer and they have no hope of a future. People want answers to problems such as the employment crises, the tax imbalances, the broken immigration system (that hurts both the migrant and the citizen), prison reform, tax reform, and fixing the roads along with national defense. If they want to listen to teens banter, that is what Neflix shows and TikTok videos are for.

Who is going to win this fall 2020? That remains to be seen, but at the current rate, if Trump is to win, it is not unreasonable to suspect that one may see election 2000 tier chicanery and multiple ballot boxes in a victory reminiscent of that which Bush had over Gore.

If The People Destroying Statues Really Cared About Fighting Racism, Then Why Haven’t They Called For The Removal Of The Statue Of Charles Darwin?
Germany is not weak, but wants to expand its hegemony in Europe
Follow