You are here: Home › If The People Destroying Statues Really Cared About Fighting Racism, Then Why Haven’t They Called For The Removal Of The Statue Of Charles Darwin?

By Shoebat on July 7, 2020 in Featured, General, Highlight 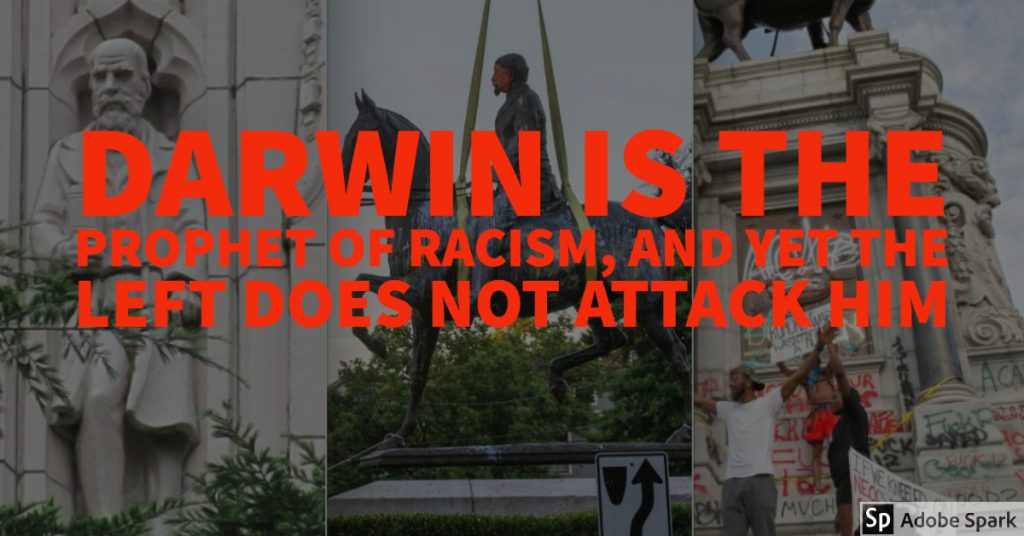 The United States is in the midst of a torrent of vicious and insatiable hatred against statues, a demonstration of Left-wing iconoclastic fury that knows no reason nor bounds. Of course, they are attacking statues that represent American culture and heritage, and want to keep and erect images that symbolize their own chaotic mentality. Make no mistake, what these people are fighting against is not as significant as what they are fighting for. The target of their vitriol is not racism, as they so claim; for if that were the case, they would be tripping on each other’s toes to tear down the statue of Charles Darwin — the patriarch of scientific racism — that still sits in the Suzzallo Library at University of Washington, Seattle. 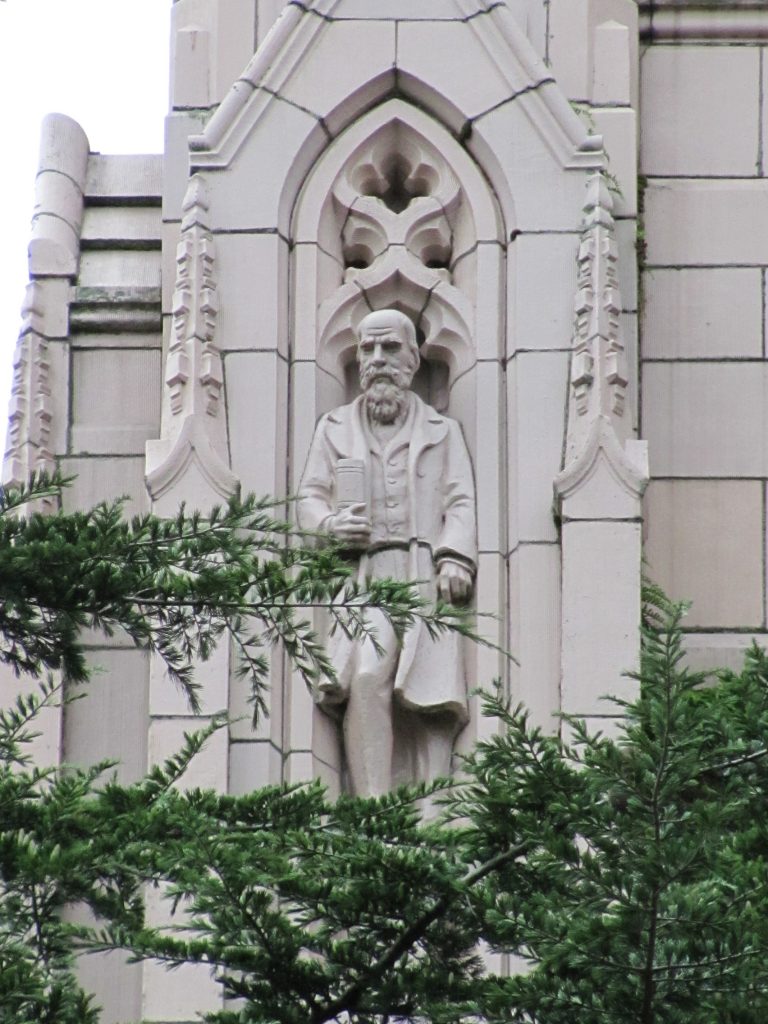 No one has defaced, graffitied or vandalized this statue. Yet, its in the middle of one of the most Left-wing cities on earth, and it remains untouched in the midst of Leftist fury against ‘racist’ statues.

If you truly hated racism, then why not remove the statue of the one who would provide the foundational principles for eugenics and Darwinism which would give the underpinnings for so many genocides and crimes, such as the mass murder of tens of thousands of Africans in Namibia by Germany, the murders of Aboriginals by Australian head hunters who captured and decapitate Aboriginals so that their heads could be ‘examined’ for ‘science’; and of course, there is the Holocaust committed by the Nazis who were zealous followers of the creed of ‘survival of the fittest.’ In fact, Darwinism has influenced every statement, every ideology, government and every movement that has pushed or pushes for the idea of a biological inferiority of a particular race, and the superiority of another race. These fanatics want to remove statues of prominent Confederate figures because the Confederacy was racist. The Confederacy was indeed racist and had as its foundational principle the belief that the White man was superior to the Black man, and it referenced ‘science’ as its authority for this. But, it was Darwinism that provided this perceived authority. Alexander H. Stephens, Vice President of the Confederacy, declared on the foundations of the Confederacy:

its foundations are laid, its cornerstone rests upon the great truth, that the negro is not equal to the white man; that slavery — subordination to the superior race — is his natural and normal condition. [Applause.] This, our new government, is the first, in the history of the world, based upon this great physical, philosophical, and moral truth. This truth has been slow in the process of its development, like all other truths in the various departments of science.

Which “science” was Stephens speaking of?  historian and political scientist Harry Jaffa, in his book A New Birth of Freedom: Abraham Lincoln and the Coming of the Civil War:

Stephens compares the great scientific discovery in regard to the Negro to the discoveries of Galileo, Adam Smith, and Harvey. He does not name the discoverer of Negro inferiority, nor does he even hint at what evidence had supposed this great discovery. One can only surmise that Darwin’s Origin of Species, published in 1859, may have been on his mind.

If the anger towards statues was really about racism, then why aren’t these fanatics removing the statue of Darwin who said:

“At some future period, not very distant as measured by centuries, the civilised races of man will almost certainly exterminate and replace throughout the world the savage races. At the same time the anthropomorphous apes, as Professor Schaaffhausen has remarked, will no doubt be exterminated. The break will then be rendered wider, for it will intervene between man in a more civilised state as we may hope, than the Caucasian and some ape as low as a baboon, instead of as at present between the negro or Australian and the gorilla.”

“I could show fight on natural selection having done and doing more for the progress of civilization than you seem inclined to admit. Remember what risk the nations of Europe ran, not so many centuries ago of being overwhelmed by the Turks, and how ridiculous such an idea now is! The more civilised so-called Caucasian races have beaten the Turkish hollow in the struggle for existence. Looking to the world at no very distant date, what an endless number of the lower races will have been eliminated by the higher civilized races throughout the world.”

“From the remotest times successful tribes have supplanted other tribes. … At the present day civilised nations are everywhere supplanting barbarous nations”

Regardless of all of these racist and eugenist statements, the Left still upholds Darwin as though he some sort of saint for their “enlightened” society. To inquire more into the thought of Darwin, let us look to one of his main allies, Alfred Russel Wallace, and what Darwin would later confide to him regarding his beliefs on eugenics.

Before Darwin had his book, On the Origin of Species, published, there was a man who was close to him, who had conceived of the idea of evolutionism, his name was Alfred Russel Wallace, and not only was he an evolutionist, but an occultist as well. Being deeply entrenched in the idea of philosophical biology, Wallace was greatly pulled, while under strong delusion, to read Malthus’ essay on population. He was a diabolically possessed individual, suffering from hallucinations and other dark visions. In his chaotic hallucinations during his stay in the Malay Archipelago, he would begin to imagine that he was having a conversation with Charles Darwin, or times with the French naturalist, Jean-Baptist Lamarck, about evolution and natural selection. “All species have evolved,” Wallace would say in his delusional and shaking voice, with his face covered with sweat, “adapted and mutated. All living organisms have descended from earlier forms.”

While in his hut, Wallace recounted, “somehow my thoughts turned,” he wrote, to Malthus’ book on population, which he had read fourteen years earlier in Leicester. He continued to write in his recounting of this contemplation on Malthus, and how he inspired him in his acceptance of Social-Darwinism:

“it occurred to to ask the question, Why do some die and some live? And the answer was clearly, that on the whole the best fitted survive. From the effects of disease the most healthy escaped; from enemies, the strongest, the swiftest, or the most cunning; from famine, the best hunters or those with the best digestion; and so on. Then it suddenly flashed upon me that this self-acting process would necessarily improve the race, because in every generation the inferior would inevitably be killed off and the superior would remain — that is, the fittest would survive. Then at once I seemed to see the whole effect of this. … The more I thought over it the more I became convinced that I had at length found the long-sought-for law of nature that solved the problem of the origin of species.”

Wallace was also an extreme heretic, following the teachings of David Friedrich Strauss, that the miracles of Christ were merely myths that grew from rumors that naturally were said about all great men of the past. (94) Other than being a heretic, he was a firm believer in occultism and partook in spiritism, necromancy and the ouija board. He put out a book in 1866 entitled, The Scientific Aspect of the Supernatural. Wallace had one hundred copies of the book printed out, and reserved twenty five copies for his friends. These reserved copies, wrapped with paper, sat in the study of Wallace’s sister, Frances, who was supposed to distribute them to her brother’s friends. But she neglected them for several days, thinking that she would eventually give them away when she had the time. One day she left the study for a few minutes and when she returned she saw that the books were scattered about the room. Frances, frightened, called her friend, Agnes Nichol, who summoned a spirit through a ouija board to seek the answer as to why the volumes had been scattered about. “One for my sister Frances, I have marked it,” said the spirit. Frances picked up a copy and began flipping through the pages. She found red crayon marks on some of the pages and believed that they were made by the spirit. “If you could do this while the book was shut up,” said Frances to the spirit, “you could write my name in this book while it lays under my hands.” She closed the book, and after a few moments she reopened it and found her name, “Frances Wallace,” written on the top of the first page.

“The organic world has been carried on to a high state of development, and has been ever kept in harmony with the forces of external nature, by the grand law of “survival of the fittest” acting upon ever varying organisations. In the spiritual world, the law of the “progression of the fittest” takes its place, and carries on in unbroken continuity that development of the human mind which has been commenced here.” (96)

The “fittest” beings of the human species, to Wallace, progress to a higher, superior spiritual plane than inferior beings. Superiority is not only obtained biologically, but religiously. For Wallace and those like him, the “selected” beings — the “fittest” that is — progress in the evolutionary process into a form of ubermensch, an ideal superior human, high in the sphere of biological fitness, and lofty in his state of intellectual and spiritual disposition, the perfect human who has obtained the impeccable state of consciousness. Both Wallace and Darwin envisaged a utopia caused by the elimination of those deemed “inferior,” and the evolution of the “superior” towards superhumanity; they both lamented that this process was not being facilitated. In 1890, Wallace recounted:

“In one of my last conversations with Darwin he expressed himself very gloomily on the future of humanity, on the ground that in our modern civilization natural selection had no play, and the fittest did not survive. Those who succeeded the race for wealth are by no means the best or the most intelligent, and it is notorious that our population is more largely renewed in each generation from the lower than from the middle and upper classes.”

That Darwin observed that this progression towards a society of perfect humans was impossible without governmental facilitation, shows that the theory of evolution was not advocated on the basis of a sincere desire for truth. For if it was indeed truth, it would take place without humans forcing it. Evolutionism was promoted, not for the cause of truth, but for the seizing of power; for the creation of a dark, dismal, mechanical and despotic society, in which the pompous, filled with a perception of power, conduct genocide on the meek, the humble, the holders of the Faith, the holders of humanity against whom the father of lies is at war.

But we can forever recount and present quotes proving Darwin’s racism, these Left-wing fanatics will never turn on the statue of Darwin; for it is not about fighting racism, but about a pursuit to power and domination and the restructuring of American society for the cause of jacobin insanity. Moreover, the fact that the Left upholds people like Darwin, Margaret Sanger, and philosophers like Nietzsche and Heidegger (who was a major philosophical supporter of the Nazis), is symptomatic of their own Darwinist tendencies, ones that would definitely manifest into an animal fury filled with violence and mayhem.

In 2016 It Was “Build The Wall”, Now It’s ‘Save The Statues’
Trump Blames His Failing Presidential Campaign On “Woke Jared”
Follow