You are here: Home › Ex-Reddit CEO Admits That She And Many Others Knew About Jeffrey Epstein 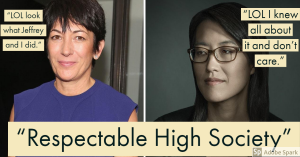 In many states, it is law that if one knows about sexual abuse, especially that of minors, and one does not report it, to do such is a crime. Now this is fascinating when one considers that the former Reddit CEO Ellen Pao as reported by Zero Hedge notes that Pao admitted openly on twitter a few days ago that she an many others new that Jeffrey Epstein was raping children and pimping them to wealthy and powerful men.

In response to a tweet in expressing relief at never having been photographed with Maxwell, Pao replied:

“She was at the Kleiner holiday party in 2011, but I had no desire to meet her much less have a photo taken with her. We knew about her supplying underage girls for sex, but I guess that was fine with the “cool” people who managed the tightly controlled guest list”

Perhaps Pao got a tap on the shoulder to let her know she just revealed herself as a potential witness in Maxwell’s upcoming case – after she was charged with four criminal counts related to transporting and procuring minors for illegal sex acts, along with two counts of perjury (via Reuters).

Maxwell has been accused by three women of procuring and training young girls to perform massage and sexual acts on Epstein and his associates, as well as participating in some of the alleged acts. (source)

There are a lot of people in society who are considered “respectable” or “powerful”, and yet, not only does the public really know very little about these people outside of a carefully constructed image, but these people many times are involved in heinous crimes and refuse to do anything about them, yet will lecture the rest of the country about how they should behave.

The abundance of evidence about Epstein and his actions speaks for itself. The man was very evil, he destroyed many lives and did not care at all about what he did, and not only that, but his “clients” actively protect him, meanwhile people who do far less are prosecuted far more harshly than they ever are.

I am not saying this to legitimize one form over another, or rather to prefer a different sort of imbalance, but rather that the standards of justice are true for all men, and that it is evidence of the tremendous crimes that go on around us and yet are seldom discussed to see how those in power not only will do, but also know and overlook such actions with callous care and the common people still claim to have respect or support for men who clearly do not deserve it at all, but are rather deserving of being thrown to their own destruction.

Germany is not weak, but wants to expand its hegemony in Europe
56 Florida ICUs Hit Capacity Due To COVID-19
Follow