You are here: Home › Survey: Almost One-Third Of Germany’s Catholics May Leave The Church 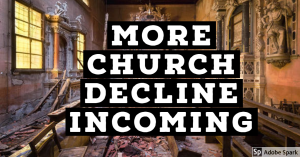 The Catholic Church in Germany has had a very long and for the last five centuries, difficult history amid the rise of nationalism and subsequent heresy. As of 2017, about 28% of Germany claims to be Catholic, with the largest concentrations in southern and western Germany, as opposed to the either Protestants or non-religious northern and eastern regions.

According to a recent survey from the Catholic News Agency, approximately one-third of Germany’s Catholics may leave the Church.

A survey released Thursday found that 30% of German Catholics are considering leaving the Church.

The poll, conducted by the research institute INSA Consulere for the Catholic weekly newspaper Die Tagespost, reported that almost a third of respondents agreed with the statement “I am a member of the Church and can imagine leaving the Church soon.”

Researchers said July 9 that 54% of Catholics disagreed with the statement, 9% said they did not know, and 7% did not offer a response, CNA Deutsch, CNA’s German-language news partner, reported.

The survey follows the release of official figures last month which showed that a record number of Catholics formally left the Church in Germany in 2019.

Some of those formally departing the Catholic Church in Germany are seeking to avoid paying the country’s church tax. If an individual is registered as a Catholic, then 8-9% of their income tax goes to the Church. The only way they can stop paying the tax is to make an official declaration renouncing their membership. They are then no longer allowed to receive the sacraments or a Catholic burial.

Researchers also interviewed members of the Evangelical Church in Germany (EKD), a body representing 20 Protestant groups including Lutherans. They found that 26% of those polled were considering leaving.

This is not a surprise, but will have major consequences for the Church worldwide, since a legal tax called the “Die Kirchensteuer“, meaning “Church Tax,” operates as a part of one’s income directly as a tithe and delivers it to the church with the state acting as the handler for the money in Germany

The Kirchensteuer has an interesting history, as it was a creation of the early 19th century in an attempt to strike a balance between the state and church in light of secularization, migration of populations, revolution, and the services provided by the church for the people. The idea is that as the churches provide essential social services and are majority land holders, and that while governments may be secular but the people are religious, the churches receive a supplementary stipend from the state as well as the faithful who, registering their religion with the state, directly pass a portion of their income to benefit the church. One may think of it as a more glorified and financially beneficial form of the IRS’s 501(c)3 status given to churches in the USA.

It would seem to be a good idea, but the Kirchensteuer did not solve problems, but only redistributed and caused more problems. The fundamental issue of the 19th century, which was the decline of religious faith and it being supplanted by nationalism and other forms of paganism continued. The payment of the Kirchensteuer did not compel more people to go to church, but reduced Christian charity to a form of patriotism combined with a concept of “social justice,” making religious institutions into a provide of social services without a necessary reference to God or the Faith.

But the biggest problem with the Kirchensteuer was the “welfare effect” it had on the churches. While it is good to help people and welfare can be good when applied properly, there are many cases of the abuse of welfare. For the Churches, Catholic and Protestant alike, the decline of the faithful but the continued registration of people as Catholic, and the increased prosperity of Germany, the Kirchensteuer became and is now the main source of revenue for Germany’s churches, both Catholic and Protestant. While as of 2011 only 13% of Germans attend church at all, the Catholic and Protestant churches earn respectively 6.09 and 5.36 billion Euros.

A majority of Germans do not like the Kirchensteuer, with it standing at a 16% approval. Yet with a third of Germans looking at leaving the Church, and considering how much money the Kirchensteuer gives to the Church, it will mean the forced closures and reduction in the power and presence of the Church in Europe and across the world. When one accounts for the already present secularization in Europe and throughout many parts of the world, how the Church is growing in the poorest places in the world, and the rise of nationalism and militarism.

While money is important when it comes to operating a Church, one cannot have money without people who believe. Likewise, charity is called charity because it is given out of love (caritas), not from compulsion.

What seems to be happening right now is a great reduction in the size, power, and influence of the Church, and if “as goes the Church, so also the world”, the decline of the Church will have even greater effects on the Protestant denominations, and ultimately create a spiritual vacuum that will be filled, through a multitude of forms, of differing kinds of paganism. The fact that this is coming at a time of rising German and European nationalism makes this all the more poignant.

We live in very interesting times, and they are about to get a lot more intense, and throughout all of it, the most important thing will be to remain close to God and His Church, knowing that in the end, God always will prevail, for He built His Church on St. Peter, and over Her the gates of hell, as per Matthew’s Gospel (16:18), will not prevail.