You are here: Home › Report: 90% Of COVID-19 Patients Show Symptoms Two Months Later From The Virus 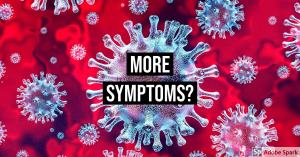 COVID-19 continues to spread around the world and make many people sick. It is true there have been many recoveries. However, since the disease is certainly unique in that it is a pandemic, some scientists have wondered if there would be ‘after-effects’ from the virus, such as long-term illnesses or health complications. According to a study reported on by Zero Hedge, it claims that 90% of COVID-19 patients suffer symptoms two months after recovering from the virus.

Almost half reported a worsened quality of life compared to before they were struck with the virus. Experts described the results as ‘extremely worrying’.

It follows a study this week which suggested almost 10 per cent of patients who lose their sense of taste or smell during Covid-19 don’t get it back within a month.

The most common symptoms among those surveyed were shortness of breath, joint pain, chest pain, coughing and loss of smell.

Italian researchers tracked 143 people who had been hospitalised with the disease but had since recovered. Only 12.6 per cent were completely free of any Covid-19–related symptom 60 days after they first became unwell (via the Daily Mail).

Keep in mind that these are people who were sick enough to require hospitalization, while most people who contract coronavirus do not.

The study revealed that just 12.6% of discharged patients were completely free of COVID-19 symptoms, while 32% had one or two symptoms and 55% had more than two.

Patients who continue to exhibit symptoms are often referred to as “long haulers,” and have taken to internet forums to describe their frustrating ‘waves’ of COVID-19 symptoms that just won’t go away months later.

The study was led by Dr. Angelo Carfi of the Fondazione Policlinico Universitario Agostino Gemelli IRCCS hospital in Rome, who surveyed patients on the two month anniversary of when they reported feeling ill. The patients had been out of the hospital an average of 36 days, with an average time in the hospital of 14 days.

According to Epidemiologist Gideon Meyerowitz-Katz of New South Wales, Australia, the findings are “extremely worrying,” though noted on Twitter that many of these symptoms are typical for those recovering from pneumonia – which coronavirus causes in many of those who display symptoms form the disease. (source)

It will be interesting to see how this develops. But no matter what the situation is, as it has often been said many times, “an ounce of prevention is worth a pound of cure.” It’s not worth risking one’s health to potentially get the disease, and then be forced to endure additional long-term potential issues.

Please be safe and stay healthy out there, as this situation is not going away any time soon.

Survey: Almost One-Third Of Germany’s Catholics May Leave The Church
Junipero Serra And The Real Hatred For The Native Americans
Follow