You are here: Home › CDC Declares That Fall And Winter Will Be ‘One of the Most Difficult Times We’ve Experienced in American Public Health’ 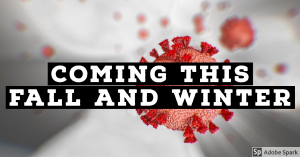 A major issue that I cannot emphasize enough is that the COVID-19 coronavirus crisis, which is happening right now, is going to get a lot bigger, with the potential of a second wave incoming. It is of interest then that as Mediaite.com reports, CDC Director Robert Redfield says he expects this Fall and Winter to be ‘one of the most difficult times we’ve experience in American Public Health.’

CDC director Robert Redfield said in a new interview Tuesday he’s concerned about the public health challenges the United States may be facing in the fall and winter.

In the interview with Howard Bauchner (editor-in-chief of the Journal of the American Medical Association), Redfield started out by emphasizing the importance of people wearing masks and repeating that if all Americans embraced masking more rigorously in the next few weeks they could get things more “under control.”

Redfield commended the president and vice president for wearing masks and said they can help set the example, as he talked about the social distancing guidelines and how mask-wearing shouldn’t be political.

He said it’s said to see “some of these public health issues become politicized.”

Bauchner asked what the next few weeks are going to look like for the United States.

Redfield admitted he initially thought the nation would “get a little break in July and August” but that’s not the case now. He again said “we could bring this outbreak to its knees” with sustained mask-wearing and social distancing.

He brought up a number of states with concerning trends, while saying “if there’s any good news” it’s that the death toll is lower than it was months ago. He also expressed hope about getting a potential vaccine by early 2021.

I am worried. I do think the fall and the winter of 2020 and 2021 are probably going to be one of the most difficult times that we’ve experienced in American public health because of what you said — the co-occurrence of Covid and influenza, and this is where I’d like to continue to work with you to get the American public to embrace the influenza vaccine so we can try to minimize the impact of inluenza, because I think those two respiratory pathogens hitting us at the same time do have the potential to stress our health system.

Those comments echo a warning Redfield gave months ago to the Washington Post:

There’s a possibility that the assault of the virus on our nation next winter will actually be even more difficult than the one we just went through. And when I’ve said this to others, they kind of put their head back, they don’t understand what I mean… We’re going to have the flu epidemic and the coronavirus epidemic at the same time. (source)

Get ready, because things are going to get very interesting.

Gunmen Attack Church, Ambush Four People And Burn Them Alive
The Refugee Crisis And the Fall Of Yugoslavia
Follow