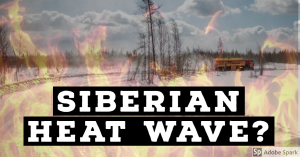 When one thinks of places that are almost always very cold, Siberia often comes to mind for many. The great land mass of Russia east of the Urals in Asia, sparsely populated and filled with previous minerals as well as historical crossing routes is the secret to Russia’s power and influence in the world. But the snow-dusted, cold lands with ancient permafrost in many parts are facing a historic heat wave that is causing massive temperature increases and in some cases thawing that which has been frozen for thousands of years.

The most chilling phenomenon in Siberia this season has been the heat. A series of warnings, reports and studies over the past few weeks have raised alarm bells over the record temperatures in the vast Russian region spanning much of Eurasia and Northern Asia.

The extreme heat wave in the Russian region is “probably the most significant weather event of the year”, said Mika Rantanen, a researcher at the Finnish Meteorological Institute, on Twitter. In an interview with FRANCE 24, Rantanen explained that it was a long-term phenomenon since “it started in winter”.

Scientists however are not surprised by the temperature variations over this vast area of 13 million square kilometres, which accounts for 77 percent of Russia’s area and is larger than Canada. They have long known that temperatures are rising faster because of warm ocean currents that melt snow.

This year, however, in addition to global warming, climatologists have noted two natural factors that have accentuated the heat spike. First, an unusually strong polar vortex over the North Pole has created a mild climate over the entire area. In addition, a high-pressure system in June favoured the rise in temperatures.

“As it was already warm in spring, the snow cover melted earlier than usual,” said Rantanen. “So the heat energy in summer has not been consumed into melting of snow and ice. This resulted in record temperatures.”

While noting that, “We don’t know yet if this is just a one-year event or the beginning of something completely new,” Rantanen warned that “it will be worrying if the conditions continue like this”.

The record Arctic heatwave has major consequences for global warming. Massive forest fires have engulfed the area, with more than 275,000 hectares going up in smoke in the vast Sakha region in northeastern Siberia, according to the Russian government forestry agency.

The number and intensity of the wildfires resulted in “an estimated total of 59 megatonnes of CO2” emissions in the atmosphere, according to the Copernicus Climate Change Service, which is a record since measurements began in 2003.

Although the intensity of the fires decreased in mid-July, 159 fires are still active and threaten 333,000 hectares. Based on satellite data, Greenpeace’s forest monitoring service in Russia estimates that around 9.26 million hectares have been affected by fires since the start of the year.

Another consequence of rising temperatures on forests is the spread of invasive species such as Dendrolimus sibiricus, a moth that can produce colonies capable of devouring the foliage of a giant pine tree in a few hours. Their voracious larvae attack conifers and their needles, making them more vulnerable to fires, leading experts to warn about their “tragic consequences” for pine forests.

Finally, rising temperatures in Siberia lead to the melting of permafrost, or ground that remains frozen for a minimum of two years and up to hundreds of thousands of years, which the Russians call “the eternal freeze”.

The thawing Arctic permafrost releases vestiges of ancient life, including Ice Age plant matter and animal fossils locked in frozen dirt for millennia, which in turn emit masses of carbon into the atmosphere.

It is also partly responsible for the damage and collapse of a diesel fuel storage tank at the Norilsk-Taimyr Energy’s Thermal Power Plant in late May, which resulted in an oil spill of an estimated 20,000 tonnes into the Ambarnaïa River. This ecological disaster prompted Russian President Vladimir Putin to declare a state of national emergency.

Climatologists have long viewed the thawing of the Arctic’s permafrost as a climate and health bomb. Their concerns are now being mirrored by some politicians. “Some of our cities were built north of the Arctic Circle, on the permafrost,” warned Putin in December. “If it starts to thaw, you can imagine the consequences. It’s very serious.” (source)

Now one can speculate as to what may or may not be the cause of this. Regardless, if these patterns continue, it could have major impacts on the functioning of Siberia and Russia’s ability to sustain her power. While warmer temperatures make it easier to extra resources from the arctic locked beneath the layers of ice, it also could cause structural instability to buildings as well as take away Russia’s main weapon that has aided her ability to defeat her enemies for centuries, which is the cold weather.

It doesn’t really matter how this happened. The fact is that major climate shifts, even if they are short-lived, can have serious impacts on the long-term stability of a region or even of a nation. The fact that Putin is openly expressing concern about this is indicative of the serious nature of the changes, since it is a direct threat to the stability of Russia.

It will be interesting to see if this heat wave persists over the coming years, and what effects it may have on Russia and her plans to rebuild herself, as she is actively doing, in an attempt to revive her lost empire just as with what is happening in Europe now.