You are here: Home › Christian Refugee Migration To The US Drops 90% Since 2015 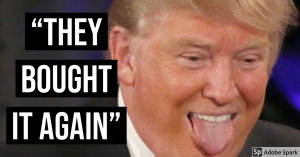 Trump promised during his presidential campaign to help persecuted Christians. He has repeated such during his time in office.

This has earned him a lot of support from Christians, especially the American Evangelical bloc. However, his talk has not measured up to his actions. This has been noted in a recent report from the Christian Post, which says that since 2015, there has been a 90% drop in the resettlement of Christian refugees into the US.

There’s been a nearly 90% reduction in the number of Christian refugees being resettled to the United States from countries where churches face the greatest persecution since 2015, according to two leading evangelical humanitarian organizations.

Open Doors USA, a watchdog group that monitors the persecution of Christians in over 60 countries, teamed up with the refugee resettlement agency World Relief, the humanitarian arm of the National Association of Evangelicals, to release a new report Friday.

The 16-page report, titled “Closed Doors,” is critical of policies that have drastically reduced refugee resettlement to the U.S. in recent years and others that have made it increasingly difficult for persecuted individuals and families to seek asylum.

“There have been many recent changes regarding refugee resettlement and asylum law that has effectively shut the door on many of the refugees from being able to access protection in the United States of America,” World Relief Vice President of Advocacy and Policy Jenny Yang told reporters on a press call Friday.

“As organizations that are working to help those that are fleeing religious persecution, particularly Christians, we feel like it is of the utmost importance that the … U.S. keeps its doors open.”

The report includes testimonies from persecuted Christians as well as data comparing the numbers of refugees resettled during the final years of the Obama administration to the drastically decreased numbers resettled under President Donald Trump.

By comparison, only 946 Christians from those countries on the Open Doors World Watch List were resettled in the first half of the fiscal year 2020. The report estimates that if projections remain steady, only 1,897 Christians from those 50 countries will be resettled by the end of the fiscal year 2020, which represents a reduction of 89.7% from 2015. (source)

i have been saying this for a long time, and it cannot be repeated enough- Christians are NOT cared for in the US save as a political bloc, and one that is in decline and will at some point be disposed of when it is convenient. Talk is cheap, and the actions do not measure up to it.

Stop trusting in politicians and start taking care of each other, because at some point, the government will likely turn against Christians, beginning with the Catholic Church as it is the largest single bloc, and when it does fully go against them, the persecution will be American style, with its legal formality and organization, but equally and perhaps even more ruthless that in the past.

If You Believe That Parler Is An Actual “Free Speech” Alternative Social Media Platform, Not Only Are You Deceived, You Just May Find Yourself In Legal Trouble
Massive Heat Wave Hits Siberia
Follow