You are here: Home › Major Cathedral In France Burns In Possible Arson 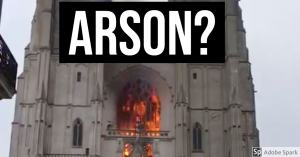 The BBC reports there has been a massive fire at the Nantes Cathedral in France, which is being investigated as a possible arson.

A fire at the cathedral in the French city of Nantes is believed to have been started deliberately, prosecutors say.

Three fires were started at the site and an investigation into suspected arson is under way, Prosecutor Pierre Sennes said.

The blaze destroyed stained glass windows and the grand organ at the Saint-Pierre-et-Saint-Paul cathedral, which dates from the 15th Century.

It comes a year after the devastating fire at Notre-Dame cathedral in Paris.

But the local fire chief said the fire in Nantes had been contained and was “not a Notre-Dame scenario”.

“The damage is concentrated on the organ, which appears to be completely destroyed. The platform it is situated on is very unstable and risks collapsing,” Laurent Ferlay told reporters.

The cathedral roof had not been touched by the blaze, he said.

President Emmanuel Macron has reacted, tweeting: “After Notre-Dame, the St Peter and St. Paul Cathedral is in flames. Support to the firefighters who are taking all the risks to save the Gothic jewel.”

The French fire service tweeted footage of the blaze.

The fire began in the early morning, with massive flames visible from outside the building. More than 100 firefighters brought it under control after several hours.

“When we arrive at a place where a fire has taken place, when you see three separate fire outbreaks, it’s a question of common sense, you open an investigation,” he said.

Newsagent Jean-Yves Burban said he heard a bang at about 07:30 local time (05:30 GMT) and saw flames when he went out to see what was happening.

“I am shook up because I’ve been here eight years and I see the cathedral every morning and evening. It’s our cathedral and I’ve got tears in my eyes,” he told Reuters.

This is not the first fire at the cathedral. It was damaged by Allied bombing in 1944, during World War Two, and then in 1972 its roof was largely destroyed.

It was rebuilt 13 years later with a concrete structure replacing the wooden roof. (source)

It does not surprise me that this happened. In fact, I would say it was long in coming, and not because of the current political situation.

The Church has always had a challenging relationship with the French, for while the Franks were referred to as the “eldest daughter of the church” and have a long history with her, they also have a long history of revolution against her in various forms, for even during the height of Christian civilization in the Middle Ages, there was a lot of controversy, such as the infamous Avignon Papacy and the subsequent Western Schism of the fourteenth and fifteenth centuries.

Ever since the French Revolution of the eighteenth century, there has been a open war on the Church and religion in general by the French government and society. The Church exists, but is in a very tense place with the government, and for far too many Christians, nationalism and religious practice have an unhealthy relationship. If she has been in decline since then, World War II was the major death blow to religion in France, as the numbers who identify and practice as Catholics have been in continual decline, with most of the numbers favoring the old over the young. It is true that Islam has grown in France a lot, but even there, a question remains as to how serious the practice of Islam will be, since many younger Muslims are secularizing and refusing to practice any religion.

With the Church essentially as a monument to a historical past that many people in France- French people, not French citizens of a non-ethnic French background -do not care about or really like, is it a surprise then that with all of the push for “revolution” around the world to tear down statues and destroy the past that a major Church like this would be burned? I am not saying this is good- far from it, for it is a horrible thing. Rather, it is that if people do not have any care or respect for the religion, regardless of how long it has been with them, it is only a matter of time that in the current climate someone would try to destroy it. It is a reflection of the French state, who does not believe that God is necessary, and if that is what one believes, then by the same logic there would be no need for a house dedicated to Him, and to destroy it would be a protest (very foolishly) against Him just as what the Revolutionaries did in eighteenth century France.