You are here: Home › Iran Reports 25 Million Infected With COVID-19 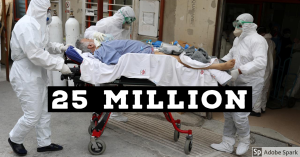 In an amazing report from Reuters by way of The Straits Times coming from Iran’s {resident Rouhani, he declared that 25 million, or over a third, of Iran’s population is infected with COVID-19.

President Hassan Rouhani said on Saturday (July 18) that some 25 million Iranians may have been infected with coronavirus, as Iran reimposed restrictions in the capital and elsewhere.

The figure, from a report Rouhani cited in a televised speech, was far higher than Saturday’s official figure for infections of 271,606, and corresponds to more than 30 per cent of Iran’s 80 million population.

Rouhani’s office said the number of infections was based on an “estimated scenario” from a health ministry research report.

Iran has been the Middle East country hardest hit by the Covid-19 pandemic, with infections and deaths rising sharply since restrictions were eased, beginning in mid-April.

“Our estimate is that so far 25 million Iranians have been infected with this virus and about 14,000 have lost their lives,” Rouhani said.

He added that “there is the possibility that between 30 and 35 million more people will be at risk”, but did not elaborate on what he meant.

More than 200,000 people have been hospitalised, he said, adding the ministry expected that another 200,000 might need hospital treatment in the coming months. (source)

This is a very interesting story, and will be followed up on as details emerge.

Major Cathedral In France Burns In Possible Arson
After The Trump Administration Gave 40% Of Last Years GDP In One Check, Now Trump Wants To Cut $35 Billion From COVID-19 Testing
Follow