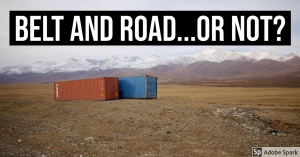 Shoebat.com has discussed the Chinese “belt-and-road” initiative, which we have done in the context of what seems to be part of a major global project to connect Europe and Asia by rail as part of a new Silk Road and, not surprisingly, making use of many of the old Silk Road travel routes. There are many reasons for this, for doing so is not only part of a major power shift moving east, but it also is a direct competition with Russia for her power base, which revolves around control over Siberia and her influence in Central Asia, since there are only two ways to the Far East from Europe- either across Eastern Europe and then all the way through Siberia into northern China, or south through Turkey and eventually across a series of diverse and sometimes highly populated lands with many different cultures, landscapes, and geographies until one either passes first into India and then Western China before traveling around the Taklamakian Desert and towards the east or across India into southeast Asia before reaching the coast. As I have noted, there seems to be a lot of competition between European and American groups working with Turkey against Russia and China for this reason.

Now as I have noted, China and Russia are “frenemies”, especially on the Russian side, as Russia does not trust her because- with very legitimate concern -she fears that China will use her heavy population and large industries to push into Siberia in the name of economics, and Russia will not be able to stop her simply because of numbers, for 142 million, no matter how adept one may be, will have a very difficult time versus 1.3 billion moving in.

It is of interest then, that according to AsiaNews, COVID-19 has significantly impacted the Belt-and-Road initiative, causing an 80% decrease in Chinese investment in less than a year, but also to related Chinese projects around the world.

In the first six months of 2020, Chinese investments in the Belt and Road Initiative (BRI) fell to just over US$ 25 billion, the China Global Investment Tracker reported.

Last year, overall Chinese investment in the programme aimed at turning China into the centre of world trade had reached US$ 105. However, the pandemic worsened a slowdown that was already evident. In fact, in 2018 Chinese investments in the new silk roads stood at US$ 126 billion.

For analysts, the BRI decline is due to slower Chinese economic growth, the growing geopolitical conflict between China and the United States, and the serious debt situation of many of BRI partner countries.

Beijing’s conditions for investments is also a major factor. China’s main financial institutions, like the China Development Bank and the China Exim Bank, only grant loans to BRI projects if Chinese companies participate and if a certain percentage of materials and components come from the China. This discriminates against companies from “beneficiary” countries.

The lower figures were released yesterday. They show that China added a total of US$ 8.1 billion of non-financial outbound direct investment (ODI) into countries participating in the Belt and Road Initiative, up 19.4 per cent year on year. This does not include acquisitions of foreign companies or company shares, which dropped significantly, the China Global Investment Tracker noted.

More recently, many BRI projects in Africa and Asia have stalled or slowed down sharply as a result of the coronavirus pandemic, which seriously affected about 20 per cent of BRI projects; another 40 per cent were adversely affected, with the remaining 30-40 per cent “somewhat affected”, this according to Wang Xiaolong, director general of the Foreign Ministry’s International Economic Affairs Department. (source)

A lot of people are worrying about masks and whether or not to wear one, but for China, they have a lot more to sorry about, for the effects of the virus are stripping the Chinese government of their ability to work on major projects crucial to building up their military economy in preparation for a war.

The COVID-19 coronavirus is truly a “gift” that keeps on giving, for the effects of it and their impact continue to be felt and are only increasing.

After The Trump Administration Gave 40% Of Last Years GDP In One Check, Now Trump Wants To Cut $35 Billion From COVID-19 Testing
Once You Understand Strategy Of Tension, You Understand All Politics
Follow