You are here: Home › After The Trump Administration Gave 40% Of Last Years GDP In One Check, Now Trump Wants To Cut $35 Billion From COVID-19 Testing 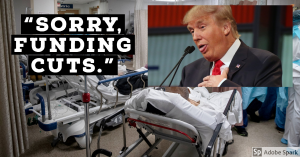 Earlier this year, President Trump signed the Families First Coronavirus Response Act that among its many consequences, gave away 40% of the US 2019 GDP in one cash payout to American citizens in the range of several thousand dollars. This is arguably the largest ever bailout and direct payout ever done in American history, with potentially major economic and political consequencse for the future. However, no according to the Washington Post, the Trump administration is squabbling about $25 billion in funds for COVID-19 testing for states.

The Trump administration is trying to block billions of dollars for states to conduct testing and contact tracing in the upcoming coronavirus relief bill, people involved in the talks said Saturday.

The administration is also trying to block billions of dollars that GOP senators want to allocate for the Centers for Disease Control and Prevention, and billions more for the Pentagon and State Department to address the pandemic at home and abroad, the people said.

The administration’s posture has angered some GOP senators, the officials said, and some lawmakers are trying to push back and ensure that the money stays in the bill. The officials, who spoke on condition of anonymity to reveal confidential deliberations, cautioned that the talks were fluid and the numbers were in flux.

The negotiations center around a bill Senate Majority Leader Mitch McConnell (R-Ky.) is preparing to unveil this coming week as part of negotiations with Democrats on what will likely be the last major coronavirus relief bill before the November election.

Negotiations are expected to kick off with increased urgency because of the rapid growth of cases — and steady uptick in deaths — in the United States. The number of cases began falling in April but accelerated sharply after Memorial Day, shattering records in the past two weeks.

The two political parties are far apart on a number of contentious issues, such as unemployment insurance, but the conflict between Trump administration officials and Senate Republicans on money for testing and other priorities is creating a major complication even before bipartisan negotiations get under way. Some lawmakers are trying to reach a deal quickly, as enhanced unemployment benefits for millions of Americans are set to expire in less than two weeks.

One person involved in the talks said Senate Republicans were seeking to allocate $25 billion for states to conduct testing and contact tracing, but that certain administration officials want to zero out the testing and tracing money entirely. Some White House officials believe they have already approved billions of dollars in assistance for testing and that some of that money remains unspent. (source)

It is quite ridiculous and another sign that while acknowledging the threats of the virus, that it is being used for political manipulation in the worst way possible.

The virus is clearly a worldwide public issue, so not only needs there to be no issue, but there is no issue in spending said money on dealing with a problem when one can spend 40% of last year’s budget- a significantly higher amount- on one bill intended to help people through this period affected by the virus.

In other words, it is politics as usual, where none care for the good will of another unless it means being able to exploit that for gain in the future at the expense of another.