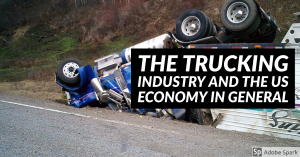 When people talk about “American heroes”, the first people that should be thought of are truckers because it is truckers who run the country, quite in the literal sense. If the wheels on the trucks driven by often overworked, underpaid, mistreated drivers stopped, the country would shut down in about seventy-two hours. It is they who keep the flywheel of American economic machine turning so that the other economic parts can function and with that, the political ambitions that follow.

But right now as Zero Hedge reports, there is a major collapse happening in heavy truck orders, known as Class 8 trucks, which is a historical indicator of economic slowdown, for in spite of the population having grown by at least 60 million since 1996, orders have crashed to far below and are barely at 1996 levels even with the continued growth of consumerism as the basis of the US economy.

Class 8 trucking orders – often seen as a gauge of how the U.S. production economy is faring, have been brutalized for almost all of 2020 so far due to the ongoing pandemic. But June’s data appears to suggest a slight respite in orders, despite crashing retail sales, even though we’re not quite certain that it’s going to carry into the second half of the year.

Regardless, June is traditionally a tough month for Class 8 orders and the industry (and its analysts) are optimistic.

Final Class 8 truck data for June has been released and retail sales were down 41% YoY to 17,055 units. Orders were up 23.2% for the month, marking a small bounce back for the industry.

This comes after two incredible poor months that we highlighted (ZH Class 8 report April, ZH Class 8 report May) where orders hit their lowest level in 25 years. In May, new orders “recovered” slightly to a dismal 6,687 number before taking off this June.

Retail sales are also lagging YTD, still down 39%, according to data from JP Morgan. Builds have appears to make somewhat of a V-shape recovery, but were down 39% YoY in June and have fallen 70% in Q2. Builds remain down 52% year to date.

But that hasn’t stopped the industry’s perpetually bullish analysts, who weigh in on the numbers every month and – somehow – can find the positive in almost the most dismal of reports.

Don Ake, FTR’s vice president of Commercial Vehicles said: “The Class 8 market is on the slow, steady recovery that matches our forecast. It is also encouraging that fleets are showing enough confidence in the economy to begin placing some viable orders. The trend should continue, but a significant increase is not expected until October when the big fleets begin placing orders for 2021 delivery.” (source)

This is more proof that the US economy is completely done- fried, dead, put into the grave -just done, because there is no more consumption in a serious way happening. What is taking place is the famous “dead cat bounce”, where there are “spikes” of activity as the entire system comes to a stop just as a chicken convulses with energy even after its head has been cut off.

The economy cannot be sustained any more because there is nothing left to sustain it. The jobs are gone, and the ability for work to come to the US is nearly impossible any more due to a morass of unbalanced legal regulations, heavy and complicated taxes, no regulation where there needs to be regulation, and prices so high for materials cost it is impossible to sustain a business in. This does not mean that people are not productive, but that the system is based on a complicated form of theft that an honest worker cannot expect to compete with because it will cheat him out of his work. In such a case, only a fool would try to play because the gains are not worth the returns unless one can find an exception to this, and they do exist, but with difficulty.

The retail industry is going to continue to collapse. As this happens, there will be more waves- at least one more, but I fear there may be several more -waves of permanent job losses as a result of the economic changes. People simply cannot afford to live any more, and while there are reports of people “fleeing the cities for the countryside”, this is most likely going to be a temporary phenomena because most do not have the money to be able to do this, nor will they be able to sustain a long-term purchase that they make because of the income declines.

If you do have money, now is the time to spend- on provisions that you need or will be useful to your family in the future.

I look at the 2020s, as painful as the current year is, as what the ant did for summer in the story of the ant and grasshopper. It is a time to work, to labor, to suffer, and to prepare as things get bad, because we know for sure that a major economic and political winter is coming. Some correctly argue it is upon us now, but I do not believe this is fully so, for I believe there is more to come and that now with the signs of change been made manifest, now is the time to work and work hard because the public has been given a warning. It is painful but also a great blessing, for being able to see what may come in the future can help a man predict what moves he needs to make to be most effective for the future.

There is no recovery coming for trucks or the trucking industry, and neither is there for the economy.

This is a taste of the future. Prepare for it, or ignore it at one’s own peril.

US Senator Who Promoted Fear Of Islamic Terrorists Crossing The US Border From Mexico Now Stands Against Muslim Persecution In China
The 1990s, Nerd Activities, Larping And The Rise Of Nazism And Socialism
Follow