You are here: Home › US Senator Who Promoted Fear Of Islamic Terrorists Crossing The US Border From Mexico Now Stands Against Muslim Persecution In China 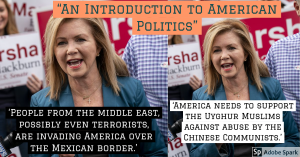 Shoebat.com has never supported Islam, but at the same time, we do not support genocide or the abuse of people, regardless of their ethnicity or religion, since it is the imperative of being a Christian to desire the good-will and salvation of all men. As a part of this, we have noted that the Uyghur (Uigur) Moslems of China have been gravely abused by the Chinese government just as many Christians have been mistreated. Now there are horrible reports and video of Chinese soldiers forcing Uyghurs, chained, blindfolded, and with their heads shaved, into train cars just like what happened in Europe during the Second World War.

S. Sen. Marsha Blackburn has warned that China’s efforts to clamp down on its Uighur population is a grim “preview” of its intent worldwide as a fellow lawmaker announced legislation Monday specifically calling out Beijing for forced labor.

“The Chinese Government is putting blind folded Uyghurs with shaven heads onto trains going to detention camps. All because Uyghurs are Muslim. This is eerily familiar,” she said on Twitter, using an alternative spelling for Uighur.

“The Chinese surveillance state being used to send Muslim Uyghurs to concentration camps is a preview of the electronic tyranny they one day seek to impose on the entire world,” the Republican from Tennessee added.

Her comments came after video surfaced of prisoners shackled in chains being forced onto trains in the autonomous Xinjiang region in northwestern China, home to the Uighur minority, in what looked like a prisoner transfer.

The detainees had their heads completely shaven and were sitting in rows wearing blue-and-yellow uniforms before being taken away by police.

Human rights groups and Western governments have been vocal in condemning China’s widespread abuses against the Uighurs.

The condemnations have focused on what China calls re-education camps, as well as allegations of mass, systemic forced sterilization. The camps, in particular, have been sharply criticized over allegations that they are fronts for forced labor and political indoctrination.

Sen. Josh Hawley, a Republican from Missouri, announced Monday that he is introducing legislation that mandates corporations audit their supply chains to ensure they are free of slave labor. He pointed specifically to the camps, saying at least 80 international firms “have been tied to forced Uighur labor in China.”

Those include Nike, Adidas, Puma, Lenovo and Samsung, he said.

“If corporate America wants to be the face of social change today, they should have to certify they are completely slave-free,” said Hawley. “If they refuse to do so, they should pay the price. That’s social responsibility.”

The Xinjiang region is home to around 10 million Uighurs. The Turkic Muslim group, which makes up around 45% of Xinjiang’s population, has long accused China’s authorities of cultural, religious and economic discrimination.

Up to 1 million people, or about 7% of the Muslim population in Xinjiang, have been incarcerated in an expanding network of “political re-education” camps, according to U.S. officials and United Nations experts. (source)

Now it is terrible this is happening. However, note that the person first referenced in the article is US Senator Marsha Blackburn.

Shoebat.com profiled her before in March 2019, when as a part of her campaign against Phil Bredesen and during the time of the “migrant caravan” heading towards the US, she said that Phil Bredesen was wrong to say it was not a threat because the people coming were “invaders”, and that it might also include “gang members”, “drug dealers”, and most ironically, “people from the Middle East- possibly even terrorists”.

Now it is true that Marsha Blackburn does not say “Muslims”, but given the focus among the American right on Islam, the US military presence in the Middle East, the talk of Islamic terrorism, and how so many people are indeed Moslems, what else could she be referring to? It certainly is not a fear of Israelis- and that is understood -because those “people from the Middle East, possibly even terrorists” are Moslems.

I am not saying that Islamic terrorism is not real, or that it should be denied. Rather, it needs to be discussed, exposed, and we have done so repeatedly. What I am pointing out is how Marsha Blackburn will, saying-without-saying-it, say that ‘Muslims are bad’, but then when China is persecuting Muslims and the US is going against China for geopolitical reasons, suddenly Marsha Blackburn makes herself a practical defender of persecuted Muslims.

Shoebat.com does not oppose the abuse of Uyghurs because they are Moslems, but because they are human beings, and if one loves his neighbor- even those who persecute us -one seeks the objective good will of another, and while that takes many different shapes based on the circumstances, part of seeking one’s good will is to stand against the willful murder of the innocent, such as many of these people who are being persecuted by the Chinese government are suffering and dying in horrible ways. Indeed, standing against the abuse of the Uyghurs is the same reason why the Catholic Church will also criticize Judaism but then helped Jews to escape the abuse from the German Reich, because while she cannot except moral evils, she also must seek the good will of all people. It is not about being “for” or “against” any group, but rather following the teachings of Christ as given to His apostles and regardless if it is politically popular or unpopular.

But Marsha Blackburn? This is an example of American political manipulation at its finest, to speak against one group at one time and then to immediately change when it is politically expedient on the basis of no principle other than the expansion of power and the realization of one’s goals over another at all costs.

This is a lesson that all should remember, especially Christians when a politician says something nice to them. Talk is cheap, and given the history of American politics, including many “Christians”, none should be trusted in what they say but only by what they do, lest one again support a monster that presents himself as a savior who people genuinely believe will help them.