You are here: Home › Canadian Courts Rule US Not Safe For Refugees 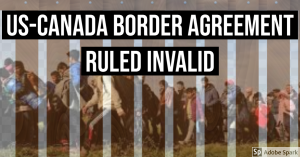 There has been a lot of contention about issues involving people claiming refugee status from other nations throughout the Western world. One of those areas of contention is the US-Canadian border, since generally speaking the US, while having a very liberal immigration policy (in comparison to many nations), is still stricter than that of Canada. In an interesting ruling from Canadian Federal courts, the court has ruled that the US-Canadian border agreement for refugees is invalid on the basis that the US is a ‘human rights violator’ and thus is not safe for refugees as the BBC reports.

Canada’s federal court has ruled that an asylum agreement the country has with the US is invalid because America violates the human rights of refugees.

The Safe Third Country Agreement (STCA), in place since 2004, requires refugee claimants to request protection in the first safe country they reach.

But on Wednesday, a judge declared the deal unconstitutional due to the chance that the US will imprison the migrants.

The ruling marks a major victory for Canadian immigration activists.

Lawyers for refugees who had been turned away at the Canadian border had challenged the agreement, arguing that the US did not qualify as “safe” for asylum seekers.

Nedira Jemal Mustefa, one of the refugees forced to remain in the US, told the court her time in US solitary confinement was “a terrifying, isolating and psychologically traumatic experience,” according to the court ruling.

“We’re all too familiar with the treatment that the US metes out to asylum seekers,” Maureen Silcoff, president of the Canadian Association of Refugee Lawyers, told Reuters news agency.

The 5,525 mile (8,891 km) US-Canada border is the longest border between two countries in the world.

Federal court judge Ann Marie McDonald ruled that the deal was in violation of a section of Canada’s Charter of Rights that bans the government from interfering in the right to life, liberty and security.

“It is my conclusion, based upon the evidence, that ineligible STCA claimants are returned to the US by Canadian officials where they are immediately and automatically imprisoned by US authorities,” Judge McDonald said in her ruling.

“I have concluded that imprisonment and the attendant consequences are inconsistent with the spirit and objective of the STCA and are a violation of the rights guaranteed by section 7 of the [Charter of Rights and Freedoms],” she continued.

But the judge delayed the ruling for six months to allow Canada’s parliament and the US Congress to respond. The ruling can also be appealed.

US immigration authorities not have yet to comment on the ruling.

A spokeswoman for the Canadian Minister of Public Safety and Emergency Preparedness told BBC News that they are “aware of the Federal Court’s decision and are currently reviewing it”. (source)

The current agreement, called the “Safe Third Country Agreement”, denies refugees the right to enter Canada if they had crossed through another country that offers human rights protections. Since 2004, the U.S. has been designated as a “safe” country, so any refugees entering Canada through official checkpoints have usually been turned away. The decision now reverses the current state, meaning the refugees may cross, be it by airplane or foot- from the US to Canada, or may even be able to reside in the US and then potentially migrate to Canada and claim asylum.

However, the court ruling is not necessarily the final word on the matter. The judgment appears to not take effect for six months, and in that time, the Canadian Parliament could respond with legislation that could overturn the effects of the ruling. If it was to be allowed to stand, asylum-seekers won’t have to risk entering Canada in between official checkpoints, which was the status prior to 2004.

The breakdown of this refugee agreement parallels the breakdown of “globalism” that is taking place in favor of nationalism as other countries, by “going their own way”, are turning against each other, which is something represented by the political conditions taking more dire turns around the world. In the case of the US, she is doing what she historically has engaged in, which is to embrace tendencies towards isolationism, and while this ruling came from Canada, and regardless of one’s views on refugees, it represents an acknowledgement of the growing US isolationist position by turning inward.

Many still say that “globalism is the enemy”, but for those who embrace this have missed the proverbial “train”, which is that globalism is already on its death bed, and so to “fight globalism” is to beat up a dying entity. The main threat now is, as Shoebat.com has continued to discuss, the rise of nationalism that elevates individual national desires over those of others and threatens not only to remake and reshape alliances, but also to open up old grievances that will likely lead to a third global conflict.