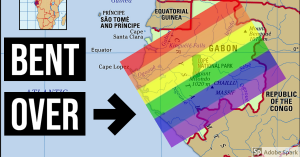 For many years, Shoebat.com has reported on all news related to homosexuality. The reasons for this are many, and one of these is that homosexuality and politics are linked. Indeed, it is arguable that in many societies of great power, this link between sodomy and the concentration of authority are related because they very act itself is an assertion of dominance over another which one can see throughout animal behavior. In American foreign policy, while many people will speak of “Christianity”, the reality is that much of American foreign policy support is connected to the behavior of sodom, and with that those who refuse to accept sodom also are denied American aid in the name of “human rights” and if persisted in for long enough, may result in national instability coming in the form of “wars” or conflict that just seem to appear from nothing.

The small central African nation of Gabon has been on the radar of Shoebat.com for a while, since Gabon is a major producer of oil and since January 2019 the US has been sending troops to the small nation. Interestingly, following the growing partnership between Gabon and the US, Gabon has now decided to decriminalize homosexuality.

Gabon’s LGBT+ community said on Wednesday they feared a homophobic backlash after the lower house of parliament voted to legalise gay sex, less than a year after making it a crime.

On Tuesday, 48 members of parliament voted to revise a 2019 law that criminalised same-sex relations, while 24 voted against and 25 abstained. To become law, the Senate also needs to approve the proposal.

“The major part of the citizens are against it,” Leslie Obuo, an LGBT+ journalist based in Gabon, told the Thomson Reuters Foundation by phone from the west African nation.

Gabon’s government did not respond to requests for comment.

Gay sex is illegal most African countries. Botswana and Angola decriminalised same-sex relations in 2019 but large populations of religious conservatives in Africa, including in Uganda, Kenya and Nigeria, oppose LGBT+ rights.

Gabon passed a law in July 2019 that punished sex between people of the same gender with up to six months imprisonment and a fine of 5 million CFA francs ($8,664).

While Tuesday’s vote to allow same-sex intimacy was met with glee by many in the LGBT+ community, others feared a backlash.

“It is a good thing that this has happened and I am happy. But I will not be surprised if there’s a riot in the near future and that forces the government to put the law back in place,” said Didier, a gay Gabonese man.

“Some said the president should lead the way and become gay since he wants to turn the country gay – because that is what they think this move means,” said Didier, who declined to give his full name for fear of homophobic violence. (source)