You are here: Home › One Person Dies Every Eight Minutes From COVID-19 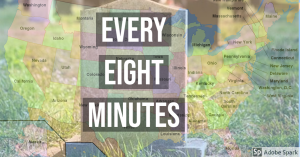 A lot of people insist that COVID-19 is not a threat, and that life should simply continue to go on as normal. Nobody likes the disruptions caused by a pandemic, but generally speaking, severe sickness and death are also not ideal options either. While people argue about if the illness is serious or not, there are a lot of people continuing to die, and while many of them are elderly, it does not make the disease any less of a public health concern.

One statistic was recently reported by Yahoo! News, which is that according to the current information, approximately one person is dying every eight minutes of COVID-19.

COVID-19 has ravaged Florida, with more than 237,000 people testing positive and 2,013 dying from the virus in July alone. A record 173 Floridians died from the virus Thursday, an average of more than one every eight minutes. And that has taken a heavy toll on residents older than 65, who account for just 13% of the state’s coronavirus cases but 82% of the fatalities. (source)

One can say that ‘well, (substitute something else here) kills people every (insert a rate that is higher than the current one for COVID-19)’.

However, this is not a competition over who is deadlier or not. The point is that from a medical standpoint, there is a disease pandemic going around, doctors, nurses, and other medical personnel who work directly with patients are aware of this and have to take extreme precautions, and it is eventually going to pass, as all disease pandemics do.

Diseases are not political things, regardless of whatever party tries to do to reduce them to or use them for as it pertains to altering the state of government and society. They are human issues, and the first concern has to be for the general welfare of the common man, which given the actions of Congress and many governments around the world, is their absolute last concern.

There is no good reason right now not to take safety precautions, for while one may disagree or dislike certain aspects of what this involves, it is a matter of courtesy for others, especially in environments where there is a high concentration of the pandemic, or in private businesses who request, as it is their legal right to do so, to ask those who enter into their premises to please abide by their rules for sanitation and preserving order. Indeed, it would be a very unfortunate, terrible thing if somebody did not wear a mask and accidentally infected another person with this virus, and that person died because of it when it could have been easily prevented.

It is true that a lot of elderly people are disproportionately affected by this virus. In that sense, one might say that wearing a mask at this current time is not just common courtesy for the public, but also “respecting one’s elders”, since they are the most likely to die if they contract it.