You are here: Home › Hindu Terrorists Brutally Murder Woman For Becoming A Christian 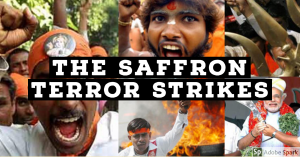 The plague of nationalist Hindu terrorists continues to besiege India as the nation becomes with each day moreso one of the most dangerous places on Earth to be a Christian in, where attacks from Hindu terrorists are common and many times allowed to happen with permission of local authorities. According to a recent story from the Christian Post by way of UCA News, a woman in India was brutally by a group of Hindu terrorists after she became a Christian.

A woman in India who had recently converted to Christianity was brutally murdered by four youths associated with a Hindu fanatic group, marking the fifth religiously motivated killing of a Christian in the country in less than two months.

UCA News reports that four youths were arrested in connection with the murder of a Christian woman, Suman Munda, 25, killed in Redhadi, a village in Khunti district, on July 19.

A local pastor who requested anonymity told International Christian Concern that Munda converted to Christianity six years ago. After learning of her conversion, radical Hindu nationalists started harassing her.

When relatives visited Munda’s house they could not find her, they later discovered her body at a deserted place near her home.

“I suspect that it is the handiwork of a Hindu fanatic group. Christians here have been facing a serious threat from it. The fanatic group is asking us to go back to Hinduism. We are scared and our people are shattered,” Bishop Binay Kandulna of Khunti told UCA News.

Last month, Ramji Munda, 27, was murdered in the same district. Villagers believe the Christian man was killed by an anti-Pathalgadi group that safeguards tribal people’s rights.

“It is a matter of serious concern because the state witnessed a Christian man killed only last month in the same district. The administration as well as leaders should take note of it and take appropriate steps,” Kandulna said.

“Persons of any faith are a creation of God and we have to respect all, but some vested interest groups are trying to target minorities in the state to spread hatred among various faiths who are otherwise peace-loving people.

“We condemn the killing and appeal to the administration to take strict action against the culprits. It is very unfortunate that we have lost a precious life.”

Munda was the fourth Christian to be murdered in India in the last two months. Previous killings included a woman, a teenager, and a pastor — all targeted for their faith. (source)