You are here: Home › Evil Drug Cartel Captures, Interrogates, And Hacks Old Woman Into Pieces And Puts Them Into A Trash Bag 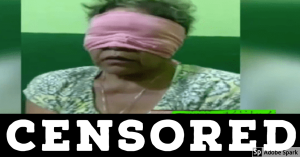 El Blog del Narco reported a horrible story out of Mexico where an elderly woman was captured, interrogated, and then cut into pieces by the cannibalistic Cartel Jalisco Nueva Generacion.

A senior citizen was interrogated and later dismembered by drug traffickers from the Elite Group of the Jalisco Nueva Generación Cartel (CJNG).

In the municipality of Cortazar in the state of Guanajuato, in Mexico. In the scenes the lady appears blindfolded and after the questioning that was made her dismembered body appears along with a narco-message for allegedly selling drugs known as “blue jale”.

“To all those people who work for the Marro who already get rid of that because they left me alone,” says the woman they question while the subject who asks him questions asks: “Has it become clear to you who is in charge here in Guanajuato? ? ”, To which the victim responds:“ The Jalisco New Generation Cartel , ”and that is when the recording is cut and images of the lifeless woman appear.

In the narco-message that they left with the remains, the following could be read: “This happened to me because I did not understand that all Guanajuato already has an owner and the only company that is in command is the CJNG of Mr. Mencho and we are going for you: Warris, Calaca, China , Cañas , Mauricio and Diego Estefanìa, Atte: CJNG, Grupo Élite ”(sic).

So far, the identity of the woman between 50 and 60 years of age who was mercilessly murdered by CJNG members is unknown .

The execution is recorded a few days after a subject who calls himself the Double “R” or the “R2” leader of the Elite Group of the Jalisco New Generation Cartel will not long continue the war in Guanajuato because it threatened that the days José Antonio Yépez Ortiz, alias el Marro, leader of the Santa Rosa de Lima Cartel (CSRL), are numbered.

It may interest you: More chaotic than Los Zetas, the trail of blood that the CJNG has left in the country

He insisted that attacks on innocent are condemned and blamed most are committed by people of the CSRL and made a call to all people who support the “innocent kills” of the Marro to stop doing so , because it promises to clean will continue . (source)

WARNING: VERY GRAPHIC VIDEO. NOT FOR CHILDREN. YOU HAVE BEEN WARNED.

Now I am not going to get into the issue of the charges of this woman selling drugs or not, because the fact is, one really does not know what happened, as many innocent people are frequently blamed for horrible violence such as that done by the cartels.

But as I have said before, I want you to think about this from the perspective of your “average Jose.”

Imagine that one day, your mother or grandmother goes out to the market to by provisions. She does not come home for hours, and then you find a copy of this horrible video released on news media, and the police inform you of the terrible news.

How would you feel about the situation?

Would you want to stay where you are living, or would you consider moving? The answer for most is obvious- time to get moving and as soon as possible, because not only could violence come upon you, but who wants to live in an area knowing that such monsters are all around you?

You move, but no matter where you seem to go, the violence is always there, and you are in continual fear for your safety.

Then one day, you get a call from a friend living in south Texas. He is working on a grapefruit farm, and the work is hard and pays low, but for Mexican standards, it is high, and they are looking for more workers. The pay is so good for your standards that you can send your family to live in a much safer area of Mexico while you work, and possibly with enough time, maybe you can bring them over to live and get away from the violence.

Would you take the chance if it was offered to you, and would you care if anybody thought else for you doing this? You would take the chance, and you would not care at all what others thought because, as you know, your family was directly affected by these monstrous cartel members, and you want to get away from them as fast as possible.

This is what struck me about this video. That woman could have been and probably was somebody’s grandmother, and instead of living out a normal life like old people are supposed to (for being pro-life is always from conception until natural death), the woman instead ended her days being cut up like an animal in a slaughterhouse and thrown into a trash bag.

What does her family think? Do they even care? What about her children, grandchildren, friends, or neighbors? Do they have a sense of the gravity of what happened, and are they not afraid for their lives too?

One can only theorize about what may or may not have happened. However, it is clear that all can conclude the treatment of this woman is a horrible thing, and that if most people were in a situation close to something like this.

Keep this in mind in any discussion about migration and immigrants, for while migration is used as a political tool, a lot of the people coming are truly attempting to escape very horrible situations that the average American, including myself, does not fully comprehend how life must be like to live under.

To give a comparable example, Russia is very difficult to live in, and a lot of Russians try to leave Russia. However, the Russian neighboring country of Turkmenistan, which is ruled by a dictator who does not care at all for his people, has seen almost one-third of her population move to Russia in a desperate attempt to escape and never come back. It has become such a serious matter that it is threatening the long-term survival of Turkmenistan.

While it is true to a point that many things are relative, people try to get away from very bad situations, no matter where one is. As such, please show kindness to these people, for one can only imagine what many have had to endure

Is There A 2020 October Surprise Incoming?
The Fall Of The Global Order: The Breakdown Of Europe, The Rise Of Germany And The Dividing Of The World
Follow