You are here: Home › Is There A 2020 October Surprise Incoming? 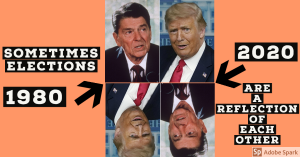 In an interesting story from TheHill, the political news site reports that, in their view, the 2020 election looks a lot like the 1980 election.

In many ways, 2020 is 1980 in reverse. That year, Ronald Reagan won a landslide victory and Republicans made remarkable congressional gains. Entering the fall campaign, President Carter’s approval rating stood at a dismal 38 percent. Carter hoped to overcome his poor marks by making his opponent the issue. Many saw Reagan as too old (he was 69 and would be the oldest president at that time); too out-of-touch (he called the Vietnam War a “noble cause”); and too gaffe-prone (he said trees were a major cause of pollution). Carter’s chief strategist, Hamilton Jordan, chortled that it was “delicious” watching Reagan “stumble from one controversy to the next.” The Carter game plan was clear: Make the election a choice, not a referendum.

This year, Donald Trump seeks to replicate Carter’s strategy. Trump repeatedly avows that the 77-year-old Biden has lost a step and would be put in a nursing home if elected. Just as Carter tried to sow fear – arguing that Reagan would cut Social Security and Medicare – Trump is engaging in fear mongering, contending that a mentally challenged Biden would be controlled by extremist elements within his party. But, like Carter, Trump’s game plan is deeply flawed. In 1980, Reagan reassured voters that they had nothing to fear. Today, most voters are not afraid of Joe Biden.

1980 began a Republican era. Voters accepted Reagan’s premise that government was the problem, not the solution. Even when Bill Clinton sought reelection in 1996, 56 percent believed government was “doing too many things” better left to businesses and individuals. By 2019, 56 percent wanted government to “do more to solve the problems and help meet the needs of people.” The pandemic has only increased the public’s sense of urgency.

Something else has changed to favor Democrats. In 1980, 88 percent of voters were white, 10 percent were African American, and just 2 percent were Hispanic. By 2016, the electorate was 71 percent white and minority voters – including African Americans, Hispanics and Asian Americans – rose to a combined 30 percent. Forty years ago, the “real majority” was described as “un-young, un-poor and un-black.”

Today, as in 1980, the United States is a profoundly unhappy country. Forty years ago, voters judged Jimmy Carter to be a moral man who was not up to the job of being president. Today, voters see Donald Trump as an amoral, unlikable person who is an incompetent president. There are 100 days left in campaign 2020, and much can happen to an already exhausted country. But one thing is certain: The Reagan era is over. Unless things change substantially, this election is 1980 in reverse. (source)

These are all very interesting observations. Shoebat.com also has noted that the 2020 election bears a striking similarity to the 1980 election, which is famously know for the “October surprise” moment, which was a term created by then CIA Director William Casey to describe an event whose purpose notably influences, at the last minute, the outcome of a major election. In the case of Reagan’s election, it was secret meetings with the Iranian government to prevent the release of American hostages in order the Reagan and not Carter would win the 1980 election.

In 1980, we had the Iranian hostage crisis, but in 2020, we have the COVID-19 pandemic. There are major differences between the two, and the US is significantly poorer now than she was then (at the time, the US was the largest creditor nation on Earth, and following Reagan’s behavior, she became and remains not the largest debtor, and the largest debtor in world history).

For example, could there suddenly be a cure discovered in October, that leads to the virus disappearing or significantly being reduced (assuming the virus does have some origins in a lab as a creation and artificial release)?

Could Biden suddenly make another “Biden” statement that makes people completely disillusioned with him (considering that Biden is the least likely candidate, and clearly well known, who could win an election)?

Could there be some “discovery” about “Chinese involvement” found by the Trump administration (assuming, like with Iran in 1980, the US may be working with the Chinese right now in order to create the image of more conflict in order to modify the elections)?

What I am suggesting is that if this election looks a lot like 1980, it may be a lot more similar in more ways than what one could even dream about.

Could it be that a lot of the anti-China rhetoric right now is really not about China, but about like with Iran, making people angry so that Trump can come out with “the answer” to stop “BIG BAD CHINA” and then immediately make a trade deal with her, as opposed to “EVIL COMMUNIST LOVER BIDEN”?

This does not even take into account the possibility of mass voter fraud that could happen because of the COVID-19 disruptions to the economic and distribution systems, which have already been seen in votes in other states. As I have noted before, it has the potential to make the 2000 Bush v. Gore election and the contested Florida votes seem orderly.

What I am saying is that The Hill may be right in more ways than expected. Consider 2020 to be an election worth pulling up a bucket of popcorn and grabbing a soda for, since it is going to be quite the experience to watch as two politicians who openly do not care at all about the American people or the social contract they promised to uphold care at all, as the country becomes poorer and more dysfunctional with each passing day.

Poll: One Quarter Of Americans Believe COVID-19 Crisis May Have Been Intentionally Engineered By The Government
Evil Drug Cartel Captures, Interrogates, And Hacks Old Woman Into Pieces And Puts Them Into A Trash Bag
Follow