You are here: Home › Billy Graham’s Son Warns That The US Faces ‘All Out Socialism’ If People Do Not Vote For Politicians Who “Love This Country” 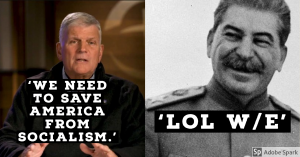 The famed American Protestant evangelist Franklin Graham has warned according to the Christian Post that American faces “all-out socialism” if leaders are not elected- alluding to President Trump and the Republican party -who “love this country.”

Prominent evangelist Franklin Graham warned of “all-out socialism” if Americans do not vote for leaders who “love this country, defend the Constitution, & support law & order.”

In a Twitter thread Monday, Graham warned about the consequences of complacency from evangelical conservatives and “every person who loves this country.”

He pointed to the “chaos erupting in cities controlled by liberal, socialist-leaning leadership” as a harbinger of things to come on a national level if “this kind of leadership wins in local, state & national elections in November.”

“If this kind of leadership wins in local, state & national elections in November, we’ll see more of this, which would lead to the demise of our nation as we know it,” said Graham, son of the late evangelist Billy Graham.

In a subsequent tweet, he described the violence and unrest in Portland, Oregon, as “an example of what will take place in other cities if Americans do not take a stand in defense of the nation—through the power of the vote.”

“Socialism is dangerous, and we have a party and many politicians who are flirting with all-out socialism,” he stressed.

“I would encourage every person who loves this country to pray & to turn out by the millions to vote. Don’t just watch the news & be depressed—stand up for America! Vote for leaders who love this country, defend the Constitution, & support law & order. Most importantly, pray.”

During the previous election in 2016, Graham made a similar warning, saying that America’s new enemies are “progressives” and “godless secularism.” He also described the presidential election taking place that year as the “most critical in our lifetime.”

In an op-ed Tuesday, Dr. James Dobson, psychologist and founder of the Christian organization Focus on the Family, echoed Graham’s concerns about the perils of socialism. He listed the battle between “capitalism versus socialism” as one of several reasons why “the stakes are high this election year.”

“Socialism limits enterprise and creates undue reliance on the state,” he said. “Socialism, at its core, is a secular framework that installs government as ‘god.’ It has no use for faith, freedom, or the will of the people.”

The aforementioned Twitter thread sent out by Graham is not his first effort to motivate evangelical Christians to go to the polls this fall. The evangelist appeared in a documentary film called “Trump 2024.” The movie, which organizers hope will be shown at 1,500 theaters across the country, warns of socialism and the End Times if President Donald Trump is not re-elected this fall. (source)

For those who have not paid attention, the US is already socialist.

This is not an exaggeration, for we have been for a long time. Indeed, the first major step towards this was taken back in the 1930s under FDR’s New Deal, as well as the passage of the Social Security and Wagner Acts of 1935 that respectively created the Social Security Administration and the National Labor Relations Board that banned “unauthorized” strikes. The US has been on the road to socialism since, depending on one’s age, from the time of one’s grandparents or great grandparents were children.

The biggest advancement of socialism, barring the recent COVID-10 stimulus checks and soon to be a second round of them, was the TARP bailouts of 2008. This was outright socialism, and the difference between then and the COVID-19 checks is that the government is bailings out corporations and citizens (by way of helping fund expenses) instead of just corporations.

The point I am making is that socialism has been here for a long time, and the merger of state and corporate power by way of government ownership in corporations upon taking the recent COVID-19 checks for companies is textbook fascism.

It does not matter who wins because the outcome is already decided. One can talk about the Constitution, “my rights”, “my guns”, or any other platitude, but these are all meaningless because they avoid discussion of the core issue, which is that fascism, or a form of nationalized socialism, is already here and in power. It is just a matter if it has a Republican or Democrat flavor.

The change already happened, and nobody noticed it, as they were too busy clamoring for their “Trump stacks” to go out and spend on the latest trinkets and the money printers printed and the gap between rich and poor grew even wider.

Man Decapitates His Landlord With A Samurai Sword, Says He Did It Because He Is A ‘Sovereign Citizen’
US GDP Drops By Almost One-Third In Three Months In Worst Economic Report EVER
Follow