You are here: Home › COVID-19 Causes Massive Disruptions To Hajj And The Entire Muslim World 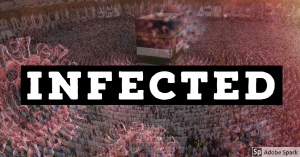 While tourism is down worldwide, and governments and citizens alike try to deal with the fallout from the COVID-19 pandemic, it has had considerable effects on the Hajj, which is the one-in-a-lifetime-required pilgrimage to Mecca that Muslims make during the month on the Islamic lunar calendar of Ramadan. While millions of people usually come each year, that number is scarcely a thousand people, most of the residing in Saudi Arabia. Likewise, the disruptions to the economic systems have caused food prices to increase and due to a lack of business in various sectors connected to the hajj, is threatening the livelihoods of people all throughout the Muslim world as the AP reports.

Small groups of pilgrims performed one of the final rites of the Islamic hajj on Friday as Muslims worldwide marked the start of the Eid al-Adha holiday amid a global pandemic that has impacted nearly every aspect of this year’s pilgrimage and celebrations.

The last days of the annual pilgrimage to Mecca in Saudi Arabia coincide with the four-day Eid al-Adha, or “Feast of Sacrifice,” in which Muslims slaughter livestock and distribute the meat to the poor.

The pandemic has pushed millions of people around the world closer to the brink of poverty, making it harder for many to fulfill the religious tradition of purchasing livestock.

In Somalia, the price of meat has slightly increased. Abdishakur Dahir, a civil servant in Mogadishu, said that for the first time he won’t be able to afford goat for Eid because of the impact of the virus on work.

“I could hardly buy food for my family,” Dahir said. “We are just surviving for now. Life is getting tougher by the day.”

In some parts of West Africa, the price for a ram has doubled. Livestock sellers, used to doing brisk business in the days before the holiday, say sales have dwindled and those who are buying can’t afford much.

“The situation is really complicated by the coronavirus, it’s a tough market,” Oumar Maiga, a livestock trader in Ivory Coast said. “We are in a situation we’ve never seen in other years.”

The hajj pilgrimage has also been drastically impacted by the virus. Last year, some 2.5 million pilgrims took part, but this year as few as 1,000 pilgrims already residing in Saudi Arabia were allowed to preform the hajj.

The Saudi Health Ministry said there have been no cases of the COVID-19 illness among this year’s pilgrims. The government took numerous precautions, including testing pilgrims for the virus, monitoring their movement with electronic wristbands and requiring them to quarantine before and after the hajj. Pilgrims were selected after applying through an online portal, and all had to be between 20 and 50 years of age.

In the Iraqi capital of Baghdad, streets were largely empty due to a 10-day lockdown imposed by authorities to prevent further spread of the virus. Eid prayers in mosques were canceled.

“We had hoped that the curfew would be lifted during the Eid period … we were surprised that the lockdown period included the Eid holiday and more,” said Marwan Madhat, a Baghdad cafe owner. “This will cause losses.”

Kosovo and the United Arab Emirates have also closed mosques to limit the spread of the virus.

In Lebanon, Muslim worshippers prayed in mosques under tight security, despite a partial lockdown imposed on Thursday that will continue through Aug. 10. Worshippers at the Mohammad al-Amin Mosque in the capital, Beirut, spilled onto the street outside to maintain social distancing rules.

In Indonesia, home to the world’s largest population of Muslims, people were allowed to attend Eid prayers in mosques under strict health guidelines, including that they bring their own prayer mats and pray several feet apart from one another. Worshippers must wear masks and are not allowed to shake hands or hug.

Authorities in Indonesia also ordered that meat be delivered door-to-door to the poor to avoid long lines.

“This outbreak has not only changed our tradition entirely, but has also made more and more people fall into poverty,” said Agus Supriatna, an Indonesian factory worker who was laid off this year because of the pandemic.

Muslim leaders in Albania and Kosovo called on people “to be careful” in their festivities to avoid transmission of the virus, including limiting family visits.

A few days ahead of the holiday, Alioune Ndong in Senegal said he did not know how he’d come up with the money for his family’s feast. He called on Senegal’s government to help struggling families like his.

“COVID-19 has drained my money,” said Ndong, a tailor based in the town of Mbour. (source)

I highlighted the part about poverty because this is one of the major unintended consequences of the pandemic.

People in many poor nations- as are many of the Muslim-majority nations -often spend large amounts of their income on food, and what is a small disruption to the “first world” has major consequences for the poorest, pushing people in poverty that most Americans cannot dream of, save maybe for those in areas with historical poverty problems such as the Mississippi delta, the Appalachian region, or post-industrial mill towns in sections of the Rust belt or Corn belt.

It does not matter if these people are Muslim or not, because regardless of the evils of Islam, the disruption to the Hajj has disrupted their economic situation, and is endangering people with poverty. When this happens, one of the direct consequences is migration- people leave seeking better work opportunities.

It is thus a trend to watch for the future that one may see an increase in migration to Europe from the Muslim world as people seek to go to, what is in their perception, an area with greater economic opportunities.

This is more than just an issue about Islam, and certainly it is of concern for all peoples, since these are human beings whose ability to care for their families is being destroyed and their lives permanently changed as a result of it.

Turkey Tells Facebook And Twitter: Give Us The Data For Your Followers Or We Will Punish You With $1.5 Million Fines
Couple Takes Down NORWEGIAN Flag From Business After Americans Complain, Mistake It For Confederate Battle Flag
Follow