You are here: Home › Couple Takes Down NORWEGIAN Flag From Business After Americans Complain, Mistake It For Confederate Battle Flag 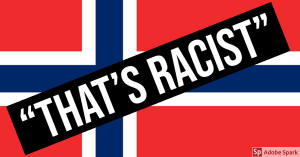 When people speak of the “Confederate flag”, most of them refer to the flag of the Second Confederate Navy, known as the “stars and bars”. However, as a note of historical importance, there were actually three basic versions of the flag for the CSA, and eleven independent variants used during the Civil War.

Something also of interesting note is the general American blindness to historical nuance or difference in favor of reactionary politics based on propagandists or agent provocateurs rather than sound material. Harper’s Magazine wrote a very important article about this pattern back in 1964 entitled The Paranoid Style In American Politics, which I recommend as an insightful read into American psychology not as a merely recent phenomena, but something that is a long-standing pattern of behavior.

One can see this kind of behavior on display throughout history in carious forms, such as with the internment of Japanese people during World War II because “Japanese are bad” and in a far less discussed way, the internment of German Americans in World Wars I and II based on the same patterns of thinking. In recent times, there is the mistreatment of Sikhs and Hindus at gas stations and convenience stores because they “looked Muslim”, and throughout American history, there is everything from riots and pogroms to vandalism and violence against priests, nuns, and Catholic Churches on the basis that the Church is a “foreign entity trying to SUBVERT AMERICA” and other insane claims rooted in fantasies of the mind and not any reality.

Unfortunately, there is no reasoning with people in the US when they begin to think like this, as the people tend to assume a “seek and destroy” model that believes one should not examine, but destroy and self-justify first because of mob support, and then in the future when it is politically or socially expedient, give a meaningless apology.

Comedian JP Sears and his How to Get Angrier at People You Disagree With video. This is unfortunately not just a comedic representation of the current situation in numerous areas, but is a long-standing problem in American life.

With that noted, there is a bed and breakfast in Michigan owned by people of Norwegian descent, and next to the American flag they would fly the Norwegian flag as a celebration of their heritage. However, the couple has recently removed the flag after a series of complaints from numerous people who were unable to distinguish between the Norwegian and Second Confederate Naval flag according to the NY Post.

A Michigan couple took down a Norwegian flag from outside their bed and breakfast because it was regularly mistaken as a symbol of the Confederacy.

Greg and Kjersten Offenecker, who own The Nordic Pineapple in St. Johns, said they removed both the Norwegian flag and an American flag posted outside their Civil War-era mansion last week following accusations of promoting racism in the largely conservative Michigan town.

The couple made the move after receiving “at least a dozen hateful emails” and twice as many comments about it, Kjersten Offenbecker told the Lansing State Journal.

“I don’t see it because I grew up with the Norwegian flag,” she told the newspaper. “To me they are two distinct flags.”

The couple, who bought the nearly 9,000-square-foot mansion built in 1861 two years ago, started flying the Norwegian flag shortly after taking over the property. Kjersten Offenbecker said they were still new in town when the owner of a downtown shop relayed to her that someone had mistaken the Norwegian flag as a Confederate one.

“We were panicked initially because we were like, ‘Oh my gosh. This town thinks that we’re hanging the Confederate flag,” said Kjersten, whose grandfather was born in Norway.

Both flags have the same colors, although their patterns and symbols differ – the Norwegian flag features a blue Scandinavian cross, while the Confederate flag is comprised of a blue “X” with white stars.

Greg Offenbecker, a Navy vet who served in Desert Storm, said he was dumbfounded that some people regularly confused the two flags.

“It bugs me as far as the stupidity of people,” he told the newspaper. “Even if the flag is blowing in the wind or laying limp, there are no stars on it. They look nothing alike.”

Kjersten Offenbecker announced the move in a July 20 statement on the bed and breakfast’s Facebook page, saying the removal was necessary given the “current cultural climate” and judgment by others based on their misconceptions.

“I urge people to slow down and see the world through less jaded glasses,” she wrote. “When we think of the worst before we have all the facts, we lose sight of all of [the] good [that’s] out there that we should find. If you got to know us you would see that we are very proud Americans and very patriotic.”

Offenbecker also noted that she and her husband have adopted two black children whom they’ve taught “not to judge on first glance or outward appearances.”

Some St. Johns residents, meanwhile, have since urged the couple to start flying their Norwegian flag again, but they’re refusing to do so unless there’s a way to make sure it won’t be mistaken again for a Confederate one, the Lansing State Journal reports.

“We’ve gotten a lot of support since taking it down but we took it down because we weren’t getting support,” Kjersten Offenbecker told the newspaper. (source)

It is clear from looking at the flags there is very little semblance save for color schema between the flags. Yet the fact that people are persisting in harassing the couple is indicative of not only this particular trait of American behavior, but the fact that as a society, we have lost the ability in any way to disagree in a civil way and are entering into a cycle of extremist and reactionary behavior that, decades later, will be decried as “another dark period” where “mistakes were made”, and historians will wonder “how could people think this way”, meanwhile people at the same time will be preparing to follow the next new Pied Piper and is deceptive flute to their destruction over a new and equally foolish issue.

The way to solve the problem is the same answer as always- not to demand an answer immediately, but to take time to process, think carefully through consequences, and respond in a balanced matter seeking mercy and justice for all. It is the Christian way, not the way of reactionaries, tribalists, manipulators, exploiters, or revolutionaries who do not seek harmony, but imbalance in all things so to advance their own control over people.