You are here: Home › The Blue Tsunami May Backfire 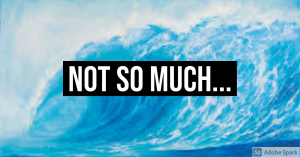 In spite of the seeming victory being given to Biden (on account of serious, 2000-year type questions about vote increases), there seems to be not only a lot of support in the election for Trump, but a growing backlash against what seems to have been an assumed “blue tsunami” as Chron reports.

The election night party Joe Biden planned in Delaware was built for a blue tsunami, with front-row seats for VIPs and a giant flag hung between two cranes, as his campaign advisers ultimately could not resist planning as if the polls that suggested a quick and commanding defeat of President Donald Trump might be right.

Instead, Democrats endured the second polling shock in four years, with election returns frequently coming in more favorable to Trump than in public surveys, in some cases outside the margin of error.

The Biden campaign appeared to place big bets late in the campaign in the hopes that the public polling would be right, expanding its television buy to states Trump would win easily. In the final week, Biden made appearances in Ohio, where he stands eight points behind with 93% of votes counted, and Iowa, where he lost by eight points with 92% of votes counted.

“We were operating in a reality that wasn’t reality, and we were operating off numbers that just were clearly not reflecting what turnout would be,” said one Democratic consultant, who spoke on the condition of anonymity to speak frankly. The Biden campaign officials have maintained that their internal polling proved more accurate than the public numbers.

Although the degree of polling misses is not yet clear as states continue to count mail-in ballots, a review of polling in 10 key states with more than 85 percent of the vote counted finds that public polls underestimated Trump’s vote margin by about 4.5 percentage points on average, similar to the size of errors in key states four years ago. (source)

It doesn’t matter who wins the election but rather who loses. If Trump loses, an angry and scorned Republican base may coalesce, cause an internal party revolt, and bring about a serious revival in several years. If Biden loses, the Democrats reform themselves and re-emerge much in the same way.

Either way, there is a major political shift taking place, and the most important point is that here the winner is the loser.