By Andrew Bieszad on November 7, 2020 in Featured, General 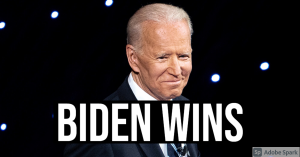 Based on the latest counts, the AP and major news media outlets declare a Biden victory.

Democrat Joe Biden defeated President Donald Trump to become the 46th president of the United States on Saturday, positioning himself to lead a nation gripped by the historic pandemic and a confluence of economic and social turmoil.

His victory came after more than three days of uncertainty as election officials sorted through a surge of mail-in votes that delayed the processing of some ballots. Biden crossed 270 Electoral College votes with a win in Pennsylvania.

Biden, 77, staked his candidacy less on any distinctive political ideology than on galvanizing a broad coalition of voters around the notion that Trump posed an existential threat to American democracy. The strategy proved effective, resulting in pivotal victories in Michigan and Wisconsin as well as Pennsylvania, onetime Democratic bastions that had flipped to Trump in 2016.

Biden was on track to win the national popular vote by more than 4 million, a margin that could grow as ballots continue to be counted. (source)

Now I will say again what I have said before, assuming Trump does not get the courts involved to his favor, and as I have noted, said without a personal bias to either political party:

THIS IS NOT A DEMOCRAT VICTORY. THIS IS A LONG-TERM REPUBLICAN VICTORY.

I will explain this more in a future article. However, I cannot say this enough. The Republicans did NOT lose anything. In fact, it is far more arguable to say that they won, and assuming that their cards are played well, any gains made under Biden may become serious long-term liabilities.

The Normalization Of Political Violence In The United States
The 2020 Election, Or How The Loser Is The Winner
Follow