You are here: Home › Former FDA Chief Declares COVID-19 Infections About To Explode 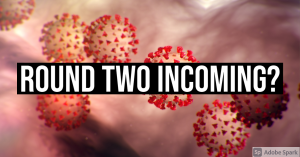 While COVID infections have continued on and are increasing in many states, the former Food and Drug Administration chief Dr. Scott Gottlieb stated that another wave of COVID-19 is about to happen and will dwarf the current and first one as CNBC reports.

Former FDA chief Dr. Scott Gottlieb warned that the coronavirus pandemic is “about to explode” across the United States as the country confirmed more than 10 million coronavirus cases on Monday, a bleak milestone just 10 days after reaching the 9 million mark amid a record surge in daily infections.

On Sunday, the country added approximately 105,000 cases, and Johns Hopkins reported that it’s the fifth day in a row where Covid cases topped 100,000.

“The challenge is this virus is distributed everywhere across the country right now,” Gottlieb said. “We’re going to have a really significant epidemic wave across the entire nation and, unfortunately, it’s going to cause a lot of death and disease before we’re able to have this therapeutic counterattack, not just with the vaccine, but also with these therapeutic antibodies.”

“The vaccine that achieves that level of effectiveness, when we’re talking about 90% or greater effectiveness of a vaccine, that really is going to afford you a degree of protection that can get you to a point where we can look towards getting back to a semblance of normal life maybe later next year, once we’re able to roll this out to a broader population,” Gottlieb said. (source)

There is continual talk of a vaccine as noted, but the fact is that one can only tell when an effective vaccine will be developed. At the current time, recent reports that COVID has spread to animals (by way of millions of minks as first reported in Denmark), there is a possibility that this second wave might not only be more dangerous, but will encompass both human and animals.

What happens is to be seen. However, the likely trend is that barring any sudden changes to the current state of affairs, this virus will come back again, with a vengeance, and cause even more economic troubles for the future.