You are here: Home › Claim: Kids Are Regressing By Being At Home Due To COVID-19 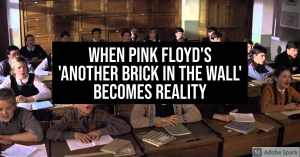 Children going to school for most of the day throughout most of the year is a common cultural practice in western nations. But what happens when the schooling is forced to stop or is interrupted long-term, and what are the consequences? According to a report from CBS coming out of the UK, some children are being found to have lost basic skills and, in spite of being home, are regressing in their educational and intellectual progress from the previous.

An education watchdog in the U.K. found that some children have regressed due to COVID-19-related school closures and restrictions. A report from Ofsted, the Office for Standards in Education, Children’s Services and Skills, says some kids have fallen back in basic skills – and some who were greatly impacted have even forgotten how to use a fork and knife.

Ofsted made visits to 900 schools and early childcare providers in September and October, according to a press release from the U.K. government department. It found there are three “broad groups” of children, according to chief inspector, Amanda Spielman.

One is the “hardest hit” group of young kids. This group has suffered from time out of school and has gone backwards on words and numbers. This group has also reverted to diapers after being potty-trained or lost “basic skills” such as using a knife and fork.

The majority of children are in the middle group and “have slipped back in their learning to varying degrees since schools were closed to most children and movement restricted.” According to Spielman, the “lost learning is unarguable, but it is hard to assess.”

A third group is comprised of children who had positive experiences during schools closures. These kids aren’t necessarily from well-off backgrounds, but do have supportive families. They might have benefited from more quality time with their families and felt a sense of togetherness with their parents.

While this story is in the UK, my question is, what is the issue with the parents?

I understand very well that parenting is a hard job, and there are many challenges in all forms that one has to face. However, the pandemic and being at home is NOT one of them.

Children historically were at home for many years as opposed to being shuffled into a school where they are effectively raised by people other than their parents. This is a comparable and historical aberration. This is also not an attack on the concept of the public school, but rather that children learn from their parents.

This is why I say that the issue goes back to the parents. Indeed, parents in America at large are terrible because they for the most part do not do anything. I am not saying that parents are not pressed for time or stressed, but that there is an idea of parents who basically do nothing and let the children raise themselves, and then to have the parents complain when the children are older that the kids have lists of problems and asking with astonishment ‘why did this happen to my children?’.

I am not surprised, unfortunately, that some children have regressed, but this is not because of the pandemic. This is because of parental apathy and a refusal to care for the good will of their children.

Again, I do not want to point at people and their unique circumstances and problems, for today there are many. However, there is no need for a regression. Children want to naturally learn, and that they are not learning at a time when so many parents are theoretically home more often or around them, it does not make sense that children are experiencing declines save for abject parental neglect, preferring to throw a phone at them with apps and YouTube for most hours of day instead of talking to their own progeny. This is an unfortunate trend, and it may continue in the future, which may also have long-term effects on education and educational policy.

Texas First State To Exceed Million COVID Cases
Woman Murders Her Own Babies Amid Plans To Traffick Their Organs, Says They Would Be “Worth A Lot Of Money”
Follow