You are here: Home › Woman Murders Her Own Babies Amid Plans To Traffick Their Organs, Says They Would Be “Worth A Lot Of Money” 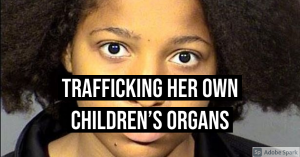 There are some crimes that are very terrible, and Shoebat.com for years has documented them especially to note possible changes in different trends. One of the trends that we have followed, especially in other countries, is organ trafficking, which takes various forms from drug dealers to Islamic terrorists to even scientists working for institutes such as the Max Planck Institute or the National Health Institute, but all of which have nefarious purposes.

Now while one cannot tie the following crime to any of the above-mentioned acts, it bears a certain overlap at least in name, and may be something to watch for as people become more desperate and willing to do immoral, evil, and insane things to support themselves. This was a terrible situation out of Las Vegas, where a woman murdered her tow babies because she wanted to traffic their organs since she figure that they would be “worth a lot of money.”

Authorities said Amanda Sharp-Jefferson, 26, told the father of her children that the babies’ organs would be “worth a lot of money.”

She was arrested Friday on two counts of open murder after her boyfriend, Jaykwon Singleton, said he came home to find her at the apartment with their daughters, Rose, 1, and Lily, 2 months, stacked on top of each other in a baby swing, both dead, according to an arrest report.

Singleton told police that the couple had been together since 2018 and had not had any problems in their relationship until Sharp-Jefferson recently “started talking about the altar spirit world,” the report stated.

The father said he returned home at 1064 Sierra Vista Drive on Friday and realized the girls were unresponsive. He told police that Sharp-Jefferson “kept shushing him and at one point, made a statement that their organs were worth a lot of money,” according to the report.

Sharp-Jefferson told police that she believed she had been set up, that she did not have any children and she did not know Singleton.

Police have said it was unclear how the children died.

Court records list one prior arrest for Sharp-Jefferson. She pleaded no contest in January 2017 to a misdemeanor destruction of property charge, although the case was later dismissed.

She appeared on Tuesday before Las Vegas Justice of the Peace Karen Bennett-Haron, who set another hearing for Thursday, when attorneys are expected to argue whether Sharp-Jefferson should continue to be held without bail. (source)

Claim: Kids Are Regressing By Being At Home Due To COVID-19
Deutsche Bank Wants People To Be Taxed For Working From Home
Follow