You are here: Home › President Loves The Pretty Colors 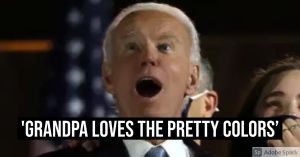 Something I noticed about Biden is his similarity to George W. Bush in his responses. During the Bush years, we had “Bushisms”, or funny things that the president would say, particular those which were, while assuming all were meant well, came out sounding strange, incoherent, bizarre, or funny. Biden is just as funny as Bush but even more so. After all, can one ever name a president who talked about children rubbing his hairy legs, who called somebody a “lying dog-faced pony soldier”, who challenged a man to a pushup contest, who smells women’s and girls’ hair in public on camera, and who makes words like “trunalimunumaprzure”? This is nothing to say for his son, whose, ***ahem*** “recorded exploits” that are quite visibly and publicly explicit and clearly him in combination with his very not hidden drug habits only add to the very comedic nature of the whole situation.

If Biden was a Republican he would be eaten alive by the media, and called every name. But because he is “their guy”, it doesn’t matter what he does or will do.

Now I have said that I have issues with both sides, and I will criticize both in their due proportion. The majority of the memes of Trump made by the political left were objectively not funny because there was nothing funny about them, since humor implies something ridiculous that is exaggerated more in order that we would see our own human inconsistencies, and most of the leftist memes failed to capture this, instead attempting to substitute open viciousness for humor, which never works. However, many of the leftist criticism and jokes about George W. Bush were funny because the situations they were discussing were in themselves of this category. Biden finds himself in the same place, but even more so than with Bush.

Just look at this photo, among several you can see here. 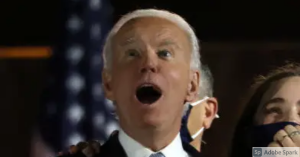 This is what we are going to have for the next four years, assuming no changes. A man who has clear signs of cognitive decline and reacts in strange and funny ways such as to fireworks.

Let the memes roll in because it is 2000 all over again.

Deutsche Bank Wants People To Be Taxed For Working From Home
Armenia Just Lost The War As Azerbaijan Becomes A Turkish Territory And Russian Power Looms: Prepare For The Revival Of Russian-Turkish War
Follow