You are here: Home › Deutsche Bank Wants People To Be Taxed For Working From Home 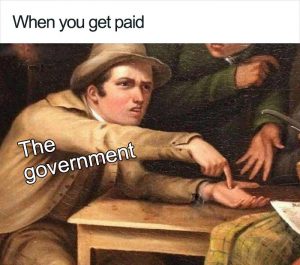 A lot of people are working from home now, and because of that, the market “landscape” has shifted. According to a report from Deutsche Bank and discussed by MarketWatch, the banking giant, whose known legal abuses and questionable dealings are many, has declared that she wants to see governments institute a “working from home” tax.

Those who work from home are getting a free ride, argues a new analysis from Deutsche Bank, and the economic ills that have been exposed by the sudden migration of roughly half the workforce to their living rooms rather than offices should be partially offset by a tax.

“The sudden shift to WFH means that, for the first time in history, a big chunk of people have disconnected themselves from the face-to-face world yet are still leading a full economic life,” wrote strategist Luke Templeman. “That means remote workers are contributing less to the infrastructure of the economy whilst still receiving its benefits.”

We’re all familiar with the “infrastructure” Templeman refers to. Huge swathes of downtown office real estate sit empty, along with their computer networks and utility hook-ups. Transportation systems designed with double the farebox revenue in mind are in serious financial distress.

On the other hand, the benefits to those workers able to do their jobs from home are quite large, Templeman argues. (source)

The arrogance of this is astounding, but not a surprise either. Remember that as much as these banks are ‘complaining’ about the empty real estate, they are doing so because they were the ones who promoted building many of this structures, all at very high-risk investments with long-term debts so they could hope to continue making hefty profits. Now that COVID has changed the shape of the workforce, those banks are mad essentially that they are losing their investments.

The common man would be told “it is your problem, you should have thought more before acting”, and would still be forced to pay even if it destroyed him. However, these banks do not dare apply that same logic to themselves. Rather, by pushing for a new ‘tax’, what they are pushing for is to try and press the government to extort the taxpayer on their behalf to give them money that will likely come back to them in other subsidies.

Likewise, the problem is not merely “banks”, but rather, the people who run the banks, for they are not monolithic entities, but institutes run by real human beings with the ability to make decisions, including to choose fairness for all under the law or greed for themselves and starvation for the rest, which they have consistently chosen the latter.

It is not a surprise why there is so much anger, most of which should be directed at business “leaders” and bank heads, since in the name of profit and policy, such “leaders” act as little more than parasites on a starving public that has been starved by their actions.

The problems are not “government” or “banks”, but specifics in them, and always tied to specific people who have no regard for human life and believe in a philosophy akin to that which God warned about in Wisdom 2, that places faith in the world and scorns all things of good and moral right in favor of their temporal gain.

Woman Murders Her Own Babies Amid Plans To Traffick Their Organs, Says They Would Be “Worth A Lot Of Money”
President Loves The Pretty Colors
Follow