You are here: Home › Dead Man For Five Years In Rural Solidly-Red County In Georgia Votes For Biden 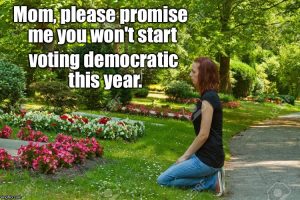 One of the points I have noted about this election is that in spite of the constant ‘line’ from the mainstream press about Biden winning legitimately, I have said it is like 2000 all over again, in that Biden- like Bush -cheated his way into the presidency, except what Bush did for four to five counties one state (Florida) Biden’s campaign did for about five states. There is too much evidence that shows cases of disappearing ballots, ballots being discarded, and cases of outright dead people “voting” mysteriously after “registering” to vote after death.

This recently happened in a rural and solidly Republican county in Georgia, where as the Chattanooga Times-Free Press reports, a Connecticut man who moved to Dade County, Georgia and died in 2015 suddenly had a ballot registered to him at his old address that had since been sold and he somehow “voted” for Biden.

The case of a deceased voter in Dade County, Georgia, whose identity was used to cast a mail ballot in the Nov. 3 general election has drawn the attention of local authorities — and is being used by the re-election campaign of President Donald Trump to emphasize concerns about vote fraud.

Edward Zigmund Skwiot, a veteran of the United States Navy, died on April 28, 2015, at his home in Trenton at age 82. Skwiot was born in Meriden, Connecticut, and had a passion for bluegrass music.

According to the Georgia secretary of state’s “My Voter” page, a ballot with Skwiot’s name was accepted on Oct. 19 after an absentee ballot was requested on Oct. 1.

Tammie Vaughan, Dade County’s elections supervisor, said the issue has been brought to her attention and will be investigated.

“I have already turned this information over to the secretary of state to be given to the investigator,” Vaughn said.

Walter Jones with the Georgia Secretary of State’s Office said he is looking into the matter.

The Trump campaign highlighted the Skwiot case and three others in a news release on Wednesday morning.

There’s no way to know which presidential candidate received the vote on the improper 2020 ballot cast in the name of Edward Skwiot. But David Skwiot, one of Edward’s sons who still lives in Connecticut, has a pretty clear idea of who his dad would have voted for if he were alive.

“There’s no way in hell he would’ve voted for Biden,” David said. (source)

It will be interesting to see what may or may not come from this and other related cases as a trend for the future.