You are here: Home › Small Businesses Are Dying Amid Pandemic And Lack Of Funds 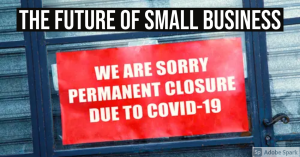 The effects of COVID-19 continue to linger and are not going away. Since the economy is consumer-driven, when people cannot earn money, they can’t spend, meaning they can’t consume, meaning businesses can’t make money, meaning they can’t pay their debts, meaning the whole economy suffers. It’s a circle of pain that is directly tied to the national debts and will not go away until the debts are taken care of, and there is no way to take care of the debt except by either a jubilee (leading to a deflationary depression) or printing money to service debts and in the process destroying the value of the money and putting the world economy system into chaos (hyperinflation). Since the latter is more politically useful, it is more likely this will happen, for as Alan Greenspan famously said, the US can pay any debts she has because all she has to do is print the money to pay it.

Another stimulus bailout is likely going to come because people and businesses alike are suffering. According to NBC, many people are asking for one as small businesses are forced to permanently close.

The election may be over, but the White House and Capitol Hill are no closer to terms on a new Covid-19 relief plan. And even if a deal is reached, it’s far too late to help save as many as 100,000 small businesses that have been forced to close while waiting for more help, like The Funky Sister. Neighborhood shops around the country are in mortal danger every day Washington fails to act.

“Many small businesses are drowning right now,” said Sung Won Sohn, an economist at Loyola Marymount University in Los Angeles. “They have very little financial cushion to begin with, many of them have hand-to-mouth operations, and they have no place to turn to except the government.”

The situation is grim. Local news outlets are filled with stories of beloved institutions going under for good as they face a raging winter coronavirus outbreak, the specter of new health restrictions and no sign of federal aid to help carry them over into brighter times when a vaccine may be available.

From a famed New York City barbershop to an influential music venue in Athens, Georgia, the NBC News audience has shared the names of nearly 200 favorite businesses they’ve said goodbye to in recent months. It’s a list that undoubtedly will grow.

But the government isn’t moving. While there’s little dispute in Washington that aid is needed, the White House and Democratic and Republican leaders are far from an agreement. Even though key parts of the last financial stimulus package expired more than three months ago, each side is still holding out for what it hopes will be a better deal.

The Democratic-led House in May passed the HEROES Act, a $3 trillion relief bill that Senate Majority Leader Mitch McConnell, R-Ky., refused to take up, saying it was too large. McConnell instead pushed for a $500 billion bill, which Democrats said was far too narrow. House Speaker Nancy Pelosi, D-Calif., and Treasury Secretary Steven Mnuchin, meanwhile, have failed to reach a deal in the $1.8 trillion range.

McConnell, fresh off his re-election, has said that he would try again to pass a more limited relief bill that included support for small businesses but that he wouldn’t accept the “absurd multitrillion-dollar socialist wish lists Democrats have demanded.”

Trump, still stewing over an election loss that he has vowed to fight, is an unpredictable factor in negotiations. Over the last several weeks, he abruptly ended and restarted talks and has shown little interest in addressing the crisis since Nov. 3.

In the meantime, according to the business listing site Yelp, 60 percent of stores that have closed since the pandemic began have done so for good. (source)

People who lose their businesses will have nowhere to go. How will they find work when so many others are also out of work?

This economic crisis is FAR from over. It is just beginning, as economies are about people, and if the people cannot participate, it has direct effects on the society, and it is not because of a lack of industry or a desire to work, but that because of monetary policy and laws created to feed that policy, people are locked out of providing for themselves and instead forced into desperation.

In other words, work as hard as you can and prepare, since there is an economic ‘day of reckoning’ at hand and we are seeing the process of it take place, as it does not happen ‘gradually’, but is small changes that suddenly change very fast at the end and well after it becomes too late to fix.

Report: Trump Contemplating 2024 Run Amid Assuming 2020 Loss
Justice Alito: COVID-19 Is A ‘Constitutional Stress Test’ That The US Is Failing
Follow