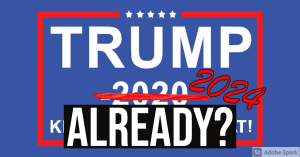 Are elections becoming like Christmas, where decorations are up for sale by Halloween? With a loyal group of followers and his chances dwindling for success in the election, there are reports according to The Hill that Trump is secretly assuming a 2020 loss and preparing for a 2024 run.

President Trump has reportedly told some of his advisers that if President-elect Joe Biden is officially certified as the winner of the 2020 race, he could announce his plan to run for the White House in 2024 shortly after, according to The New York Times.

The conversation came amid the president mulling different scenarios for his future as he faces an uphill battle challenging election results that have been called in favor of Biden.

The Times reported Thursday that at a White House meeting Wednesday, the president spoke with several advisers, many of whom told the president that his chances of changing the outcome of the 2020 election through his campaign’s multistate legal battle are extremely low.

“He knows it’s over,” one adviser told the Times.

According to interviews with half a dozen advisers and others close to Trump, the president has no larger strategy to continue denying the election results in several key battleground states, but is instead hoping to maintain support from his base as he considers what he will do once he leaves the Oval Office.

Trump’s reelection campaign has filed lawsuits in Michigan, Georgia and Pennsylvania over allegations of widespread voter fraud and voting irregularities, with Trump repeatedly claiming on Twitter that he won the election and that there was a coordinated effort by Democrats to steal the election from him.

The president has reportedly told advisers that if the race is certified for Biden, he is seriously considering announcing his 2024 bid shortly after.

Axios first reported Monday that Trump was considering running again in 2024. The news came just two days after The Associated Press and other major news outlets called the 2020 race for Biden. Trump has since refused to concede.

U.S. presidents are only allowed to serve two terms, but those terms are not required to be consecutive. The only president in history to serve two nonconsecutive terms is former President Grover Cleveland, who served as the 22nd and 24th president.

Right now, it is far too early to think about 2024. A lot can and will happen in that time, the most easily documentable being the decline of the Boomers and demographic shifts that incline to the Democrats but could change assuming four years of bad policies under Biden, a trend which I have noted before will be important to watch, especially among the critical Hispanic bloc. This does not even discuss the geopolitical tensions, and domestically speaking, the massive debts in the US that likely will be serviced by means of currency devaluation through hyperinflation.

At this point, from a politically strategic view, it is likely he will be more influential by way of doing what he does best- going back into acting and promoting his own “Trump News Network” of sorts to advance his own views and propaganda. I say this as non-partisan, and strictly from the perspective of trends and strategy, as he has a practical cult built up around him that could, if played well, live after his dead and become a force for the political right.

Trump cannot do so much in office. If he was re-elected, not only is it likely that he would ensure a Democrat victory in 2024, but he would probably be a lame-duck president and could find himself- and the Republican party by extension -blamed for the looming debt crises.

As I have said before, Trump is more likely to win by losing, as he will be more inclined to lose by winning.