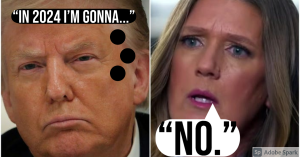 President Trump’s niece Mary Trump made news earlier this year with a book describing family problems and other issues in President Trump’s life, and according to a recent interview with her reported on by Mediaite, Trump will not run again in 2024 amid what are a series of serious health problems that he has due to a poor diet, inactive lifestyle, untreated mental issues, and possibly legal charges.

Mary Trump, the niece of President Donald Trump and author of a brutal tell-all book about his upbringing, scoffed at suggestions that he will run again in 2024, telling CNN’s Chris Cuomo that the president would “never put himself in a position where he can lose like this again.”

Like many other commentators, Mary Trump criticized Republican Senators for “enabling” her uncle’s refusal to concede the race, calling it a “dangerous situation” because he was “capable of anything.”

“This is the awful part of this,” she said. “He should have been rendered completely irrelevant by now. Whether he concedes or not, it doesn’t matter. It’s up to the Republicans to say it’s over, we’re moving on. As long as they don’t do that, they continue to give him power. They continue to give him the ability to rile up his base and other people who voted for him.”

“They’re making an incredible miscalculation here by pretending that they can control this monster that they’re unleashing upon us,” the president’s niece added,

“You don’t even want to contemplate?” Cuomo replied. “Do you think he would run again? He can.”

“Yes, he can — thank you, Grover Cleveland!” she quipped, before answering, that no, she did not think that he would, saying that any discussion that he was considering running in 2024 was just something that was “floated initially as a way to appease him and assuage his ego.”

“But he will never put himself in a position where he can lose like this again, first of all,” she said. “Secondly, it would mean for four years that he is playing essentially a supporting role, which will be very difficult for him to sustain.”

She went even further, predicting that President Trump would be unable to run again in four years, either due to health or legal concerns:

“And you know, most importantly, in four years he will be the same age Joe Biden is now. However, Donald is a very unhealthy person. He has a terrible diet. He doesn’t exercise. And he has, you know, psychological disorders that continue to go untreated. So I don’t even imagine that he’ll be able to run in four years. Plus the fact of course he may be looking at serious charges being brought against him.” (source)