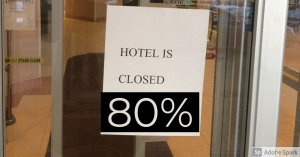 I have said that there is going to be a huge day of reckoning, economically speaking, due to the effects of COVId-19. One of these is happening right now in New York, where the Big Apple is going rotten as 80% of hotels face bankruptcy, including iconic ones.

Normally among most vibrant of global hotel markets, New York has been hammered the coronavirus pandemic has left business travel and tourism deeply depressed ravaging cash flows. The effects have ricocheted into financial markets and hit the nearly $4bn of hotel mortgages in New York that are bundled into commercial mortgage-backed securities particularly hard.

The virus has also compounded years of overbuilding and created a glut of vacant hotel rooms. And while the prospect of a coronavirus vaccine, following this week’s breakthrough by Pfizer and Germany’s BioNTech, offers a glimmer of hope, it is unlikely to come soon and avert a bleak winter for hotel owners and the investors that lent them money.

“But it’s fickle,” he said. “Realistically we aren’t going to see any improvement until the second quarter . . . The industry is really bleeding. It’s not just on life support, it’s comatose.”

For proof look no further than the latest data out of CRE consultants TREPP, according to which 37.7% of all New York hotels underpinning CMBS deals now sit on a watchlist meant to warn investors a mortgage is about be transferred to debt collectors known as special servicers. A loan may be added to the watchlist for a number of reasons, such as if the borrower’s income has dropped or they have recently missed a payment on their mortgage. In any case, once it hits special servicing, the loan is effectively in default unless the debtor and creditor manage to work out some agreement where the debt will remain “whole” after some pre-agreed restructuring.

What’s scarier is that a further 44.7% of loans have already been transferred to special servicers to either find a way to get borrowers paying their mortgage or to foreclose on the properties.

Together, it means more than 80% of the city’s hotels backing CMBS deals, approximately $3.1bn, are impacted adversely from coronavirus, far more than the national average of 71%.

“It’s terrible. There is no demand right now,” Manus Clancy, head of research at Trepp told the FT. “We’re going into a period of time when you would normally expect demand to be high. It’s the holiday season. People want to come to New York. They want to see the Thanksgiving parade and see the store fronts and go to Broadway. It’s now going to be a very dark time.” (source)

This gets even worse when one considers that, I have been repeatedly warning about, COMMERCIAL REAL ESTATE DEBT is what is at risk of defaulting here.

I said that just like with the crisis of 2007, where a combination of derivatives related to the retail housing market and debt helped destroy the economy, the next crash will be a lot worse, plus the fact that now one will not just be dealing with retail housing, but with commercial real estate, which will have very serious long-term effects on the economy because this is also coming a t a time when student loans are increasingly falling into default. The practical result is that we are looking at a situation where as long as the debt exists, there will be no economic recovery, and with that, the government eventually will use its only tool it has in order to resolve monetary policy, which is to print money until the value of that money is worth the paper that it is printed on.

Mary Trump: ‘Donald Will Not Run Again In 2024’
Fed Prepares To DOUBLE Money Printing In 2021
Follow