You are here: Home › The Power Of Soy 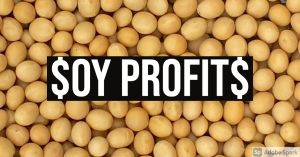 When the word “soy” is used today, it often indicates a negative connotation. For example, “soy boy” means a weak or effeminate male. “Soy face” describes a man who makes facial expressions of an effeminate nature. “Drinking soy” can mean a modern variation of “drinking the Kool-Aid”.

However, there is a certain “power” that soy has, and it is that soy is one of the world’s most traded commodities. Laugh at the small beans that grow in pods on about eighteen-inch-tall plants in fleds across the midwest and south, but the US is the second-largest producer of soy in the world at 37% and nit is soy that is a critical component of US foreign policy relations with China, because if there are any real “soy boys” in the sense of consuming soy, it is the Chinese, who is arguably the largest commodity for survival reasons.

For a while, I have written about the trend of “soy wars” between the US and China, where China was threatening not to purchase US soy and buy only from other countries. I have noted this is an absolute joke because China needs all the soy she can get, and as such she will be forced to buy from the US and in that sense remain dependent on her in this regard (the same is as it concerns pork, since pork also functions as a policy tool with China).

Farms.com recently gave a commodity analysis of soy, which found- as I have predicted -that with the incoming crop futures, Chinais not only purchasing large amounts of soy, but that it is so much that soy prices per bushel are reaching record highs. Not only that, but given a series of bad weather turns in South America, the soy crops are doing so bad there that Brazil, the world’s largest supplier of soy at 43%, suspended her tariffs to help make up for the loss in supply.

Soybean prices are the highest they’ve ever been this year.

“No one in the U.S. thought we could even get to $10/bu, and now here we are (almost at $12/bu), said Moe Agostino, chief commodity strategist with Farms.com Risk Management.

So, how did prices get to where they are?

A series of trade and weather events, Agostino said.

“It started with better-than-expected demand, particularly from China as they bought soybeans because they needed them as part of the Phase 1 trade deal,” he said.

The U.S. and China signed the agreement in January with the Asian country agreeing to ramp up its ag purchases.

As of Oct. 23, China has purchased $23.6 billion in U.S. farm products, or about 71 percent of its intended ag commitments.

Weather in South America is also contributing to better prices for U.S. farmers.

Brazil and Argentina, the two largest exporters of soybeans in the continent, “will need ideal weather conditions to produce a bumper crop, and the next five or six weeks will either make or break the crop”, Agostino said.

Earlier in the month, Brazil suspended tariffs on soybean imports from outside a continental trading bloc to help make up domestic supplies in the country.

The U.S. has been able to help fill that gap with about 42,000 short tons of soybeans.

Are these Tuesday morning prices the peak for 2020?

If South America doesn’t get the weather it needs, prices could go even higher, Agostino said.

“Many in the trade see $12, but I think we are going to see $13 futures,” he said. “It could happen by the end of the year. If South America gets less-than-ideal moisture in the next month or so, it could happen very quickly.” (source)

The trends to watch for from this obviously with China, and not necessarily with just soy.

China may want to rise, but she needs food because if she can’t feed her people, she can’t do anything. A military is as only good as it can be fed. She may expect a war with the US, but what can she do without food, especially from her enemy that she must buy from?

The trends in the soy market must be watched in accordance with China’s attempts at geopoltical rise, as well as with her other farming ventures in southeast Asia, for China has been working towards but is unable to feed her people from her own efforts (this compares with the US, who overfeeds her own).