You are here: Home › Economy Goes Back Into The Toilet As Cleaning Supplies, Toilet Paper Sales Spike Again 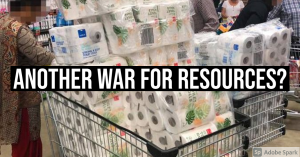 When the COVID crisis began in early 2020, people immediately created, fueled by a ‘rush’ from the media and general frenzy induced by the ever so well-known ‘madness of crowds’, a rush for toilet paper and bleach. Out of not reason but panic, people began stripping the shelves of the cleaning isles, and in the process they began to quarrel over who got the last of the Charmin, Quilted Northern, or cheap generic store bulk brand.

However, it appears that the same crisis may be repeating again as another wave of COVID is now sweeping across the country are FOX Business reports.

As coronavirus cases surge across the country, some Walmart locations are experiencing shortages of certain products.

During an earnings call with analysts on Tuesday, Walmart U.S. CEO John Furner said some stores have had trouble keeping toilet paper and cleaning supplies in stock.

“It really depends on what’s going on in the state and the city that we’re in,” Furner said, according to a transcript of the call. “The specific categories where we had the most strain at the present time would be bath tissue and cleaning supplies, and our inventory position on hand sanitizer and masks is very good.”

He added that some stores have struggled to maintain inventory for other items as well.

“We still see some stress in things like deli, bacon, and breakfast foods, but in general there is product available, just assortments of it smaller than it was,” Furner said.

Walmart Inc. CEO Doug McMillon told analysts that the locations with the shortages correspond to areas with higher coronavirus cases.

“I think the way to think of this is locally it really does have everything to do with what’s happening with COVID cases in any particular community,” McMillon said. “I was in stores last week and I saw variance from one state to the other, one location to the other, just depends on how people are feeling in that moment.” (source)

A shortage of toilet paper and cleaning means, however, is not something that one should focus on.

Now I am not saying here one may not want to grab a few extra bottles of cleaner or a few more rolls of toilet paper, assuming that one will not be buying them again for a few months. However, what I am saying is that the real trend we are looking at and need to be concerned about is not what is immediately in front of one (virus, etc.), but rather the long-term trends, and I say this without underemphasizing the need to maintain and protect one’s health.

The virus is but a catalyst for bigger and deadlier things. When one considers this, it is not important just to watch for one’s health, but to invest in other things that may eventually, and most likely for political reasons, become in “short” supply such as storable food and even small animals for meat.