You are here: Home › Did Trump Lose Georgia By His Own Actions? 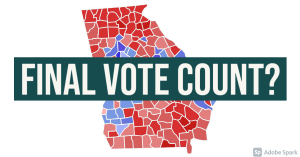 It is true that things can be manipulated extensively. However, there also can be times when one manipulates too much and loses control over what he was trying to control. Some call it ‘losing control of the narrative’, others have different terms, but no matter what the term is, one cannot always control everything, and one can manipulate to the point that one becomes entrapped in one’s own manipulation.

Note the above in the context of a recent article from Business Insider discussing the Democrat victory in Georgia, the Republican Secretary of State as well as Chief Election Official Brad Raffensperger said that Trump’s constant attacks on mail-in voting were the cause of his loss, since in his words, Trump “depressed” his own voting base.

Georgia’s Republican secretary of state and chief election official, Brad Raffensperger, has faced attacks on his credibility and the integrity of Georgia’s 2020 presidential election since President-elect Joe Biden won the state.

But Raffensperger said President Donald Trump, who spent months discouraging supporters from voting by mail in the COVID-19 pandemic, had no one but himself to blame for his poor performance in the state.

In an interview on Tuesday with Justin Gray, a WSB-TV correspondent, Raffensperger pointed out that about 24,000 Republicans who voted by mail in the state’s primary election in June did not vote at all, either in person or by mail, in the general election — and he said Trump’s attacks on mail voting could be a reason why.

“He would’ve won by 10,000 votes,” Raffensperger said. “He actually depressed, suppressed his own voting base.”

Trump has criticized Raffensperger and Georgia’s GOP governor, Brian Kemp, on Twitter. Trump has also falsely suggested that the consent decree that Georgia entered into to standardize its signature-verification procedures is “unconstitutional,” and he spread unfounded conspiracy theories attacking Dominion Voting Systems, the election-technology vendor that provides Georgia’s ballot-marking machines.

Raffensperger told The Washington Post this week that another top Trump ally, Sen. Lindsey Graham of South Carolina, asked if he could disqualify all mail ballots cast in counties with high rates of signature mismatching on the outer envelopes containing mail ballots.

But Graham disputed Raffensperger’s account of the conversation, saying that he simply wanted to learn about Georgia’s signature-matching procedures and that the notion he pressured Raffensperger to throw out ballots was “ridiculous.” (source)

Now not all people agree with this assessment. However, there has been an incredible amount of ‘back and forth” at this point, so much that we may see a rare historical example happen, which is that if enough is made about a contest of the election results and there does not seem to be any serious response from the government speaking to the matter, as I have noted, an 1876-type situation could happen, which may force the implementation of the Electoral Count Act of 1887 to be applied for the first time ever in its history.

We are living in historically unparalleled times, at least as far as it concerns American history, and given the trends towards chaos and global conflict, such examples of disorder in the US may become more commonplace. Time will be the ultimate factor in settling this matter, but what we can say is that no matter what happens, at the very least, it makes it significantly more difficult for Trump to sell a possible series of events that would create either a favorable or more favorable outcome for him.

Basically, while Trump is known for trolling, he may have ‘trolled too hard’ and instead found himself trapped by his own trolling. However, until the electoral vote counters make their final decision, it is just for all to sit back, watch, and see what the future holds.