You are here: Home › New And Deadler Strain Of COVID Discovered In Australia 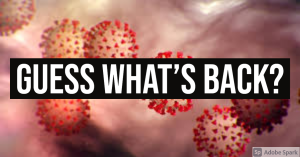 With COVID still spreading around the world and talk of another wave incoming, it is going to be an important trend to watch and see if there will be more strains of this disease that emerge and if so, how deadly they are.

According to the New Zealand Herald, a new change may be in play now and not for the better as a deadlier strain of COVID has been discovered in southern Australia.

The strain of coronavirus wreaking havoc on South Australia has particular characteristics that are most concerning to authorities.

As the state announced it was going into a full lockdown for at least six days from midnight Wednesday in a bid to combat the latest Covid-19 wave, Chief Health Officer Professor Nicola Spurrier explained the reason for the tough move.

“This particular strain has had certain characteristics,” she said today.

“It has a very, very short incubation period. That means when somebody gets exposed, it is taking 24 hours or even less for that person to become infectious to others and the other characteristic of the cases we have seen so far is they have had minimal symptoms and sometimes no symptoms but have been able to pass it to other people.”

Professor Spurrier said that characteristic meant that a generation, or stage of people passing on the virus to others, was only about three days.

“We also know, because of that characteristic, that what we call a generation, is only about three days and a generation is when one case is passing it on to the next level, and then that (next) level, so if they pass it on to two people, they will pass it on to another lot of people, and that is your third generation,” she said. (source)

As far as trends for the future, we can say that COVID is, at the very least, not only not going away, but may become even deadlier. If this happens and thee governments of the world attempt to force another lockdown, it will have the secondary and even deadlier effect of making the current situation economically speaking even worse, for while the disease is an issue, the interconnected nature and dependency on a constant cash flow to keep the economic machine running is also deadly and could bring about economic problems with direct and long-term political consequences leading up to war.

Russia Moves To Open Naval Base In Sudan
Did Trump Lose Georgia By His Own Actions?
Follow