You are here: Home › Hundreds Of Fishermen Contract Mysterious Disease In Senegal 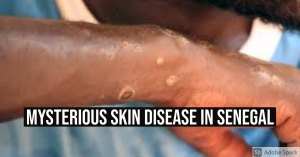 With the COVID pandemic spreading around the world, people are, generally speaking, more concerned than ever about the spread of illness. NDTV reports that concern has been heightened in the west African nation of Senegal, where five hundred fishermen have contracted an unknown illness.

More than five hundred fishermen in Senegal have contracted a mysterious skin disease after returning from sea, a senior government health official said on Thursday.
The men, who come from several fishing towns around the capital Dakar, have been placed in quarantine for treatment, according to Ousmane Gueye, national director of health information and education.

“It’s a dermatitis associated with an infectious disease,” Gueye told Reuters. “We are checking further and hope to find out soon what it is.”

A ministry of health report dated Nov. 17 said the men had “lesions on their faces, extremities and for some, on their genitals.” It added that the men were also experiencing headaches and showing slightly elevated temperatures.

It said a preliminary investigation showed that the first case was reported on Nov, 12. The 20-year old showed symptoms that included non-generalized vesicular rash, swelling of the face, dry lips and redness of the eyes. (source)

Given the current instability throughout West Africa that has manifested in wars, terrorism, and economic destruction, and how five years ago these same conditions prompted a wave of migration to Europe that manifested in the “migration crisis” of 2015 and 2016, one must ask if this new disease, depending if it spreads or not, could be one of a series of factors that sparks a revival of the migration trend to Europe that has not “broken barriers” and made Europe a better place, but has fomented an increase in nationalism and racialism leaning towards militarism, especially within Germany.

Bill Gates Declares That Most Business Travel Will Disappear
Is There A Russian Interest Hiding In The Current Ethiopian Conflict With Tigray?
Follow