You are here: Home › EU Puts More Sanctions Against Belarus 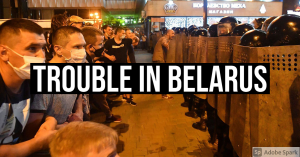 Belarus is known as “Europe’s last dictatorship”, but with a trend of rising nationalism and months of internal tension in that nation between she and Russia, the nation is being threatened with arguably the most political instability since the fall of the USSR and the rise of her strongman who still holds power, President Aleksandr Lukashenko. However, according to Belarus Feed, more chaos is threatening that nation as the EU has just put more sanctions against her.

EU foreign ministers agreed on Thursday to prepare a new package of sanctions on individuals and entities in Belarus, in response to state repression of peaceful protests. This, as reported by TASS, said the head of EU diplomacy Josep Borrell at a press conference following an online meeting of 27 foreign ministers.

“Today we agreed to push ahead with a new round of sanctions on Belarus in response in response to state repression ioland in order to support the Belarusian people. These sanctions will be introduced not only against individuals, but also against [government] structures, companies and entrepreneurs,” said Borrel.

Borrell said the EU was reviewing all its financial assistance to Belarus and none of its aid would be channelled through the government of Lukashenko, who Brussels no longer recognises as the legitimate president. He noted that all funds for the country will go through NGOs to civil society.

As Reuters reports, citing two European diplomats, a new set of restrictive measures will be prepared in the next few weeks. They will target, among other things, the entities that, according to sources, finance Lukashenko and his government. It is not specified what companies are in question.

Recall that the first package of sanctions was adopted on 2 October. The EU imposed travel bans and asset freezes on 40 Belarusian officials – security leadership [representatives of the Ministry of Internal Affairs and the KGB] and members of the CEC. Then Alexander Lukashenko was not included in a sanctions list, “since this would undermine the demand of Brussels to start a dialogue with the opposition through the mediation of the OSCE.” (source)

Is There A Russian Interest Hiding In The Current Ethiopian Conflict With Tigray?
Mysterious New Microbes Are “Waking Up” As Arctic Ice Thaws
Follow