You are here: Home › Mysterious New Microbes Are “Waking Up” As Arctic Ice Thaws 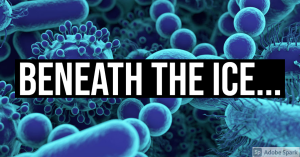 A premise of many horror films is the idea of ‘mysterious organisms’, either from space, unfrozen in ice, or created by scientists, are somehow aroused to life by accident or military researchers, at which point control is lost over them and they start killing people in horrible ways. This was the plot of the movie The Thing, as well as was the theme of the Metallica music video “All Nightmare Long”, the former in which is aliens unfrozen from Antarctic ice, and the latter which is an organism that arrives from an asteroid, but both of which cause terror. It is also the basis of the “Resident Evil” game series, where the Umbrella Corporation makes a biological agent that turns against them and causes people to turn into zombies.

However, governments have threatened to do this before. Operation Cherry Blossoms at Night was a Japanese plot by the notorious Shiro Ishii of Unit 731 in Japan that did a series of human experiments on people wanted to release biological agents over the US. It is not far-fetched to think that such a thing could not happen, by accident or choice.

It is therefore interesting that Scientific American reports that as Arctic ice is thawing, that new and mysterious microbes are waking up, and scientists are yet to discover what they can do.

In the last 10 years, warming in the Arctic has outpaced projections so rapidly that scientists are now suggesting that the poles are warming four times faster than the rest of the globe. This has led to glacier melt and permafrost thaw levels that weren’t forecast to happen until 2050 or later. In Siberia and northern Canada, this abrupt thaw has created sunken landforms, known as thermokarst, where the oldest and deepest permafrost is exposed to the warm air for the first time in hundreds or even thousands of years.

As the global climate continues to warm, many questions remain about the periglacial environment. Among them: as water infiltration increases, will permafrost thaw more rapidly? And, if so, what long-frozen organisms might “wake up”?

Permafrost covers 24 percent of the Earth’s land surface, and the soil constituents vary with local geology. Arctic lands offer unexplored microbial biodiversity and microbial feedbacks, including the release of carbon to the atmosphere. In some locations, hundreds of millions of years’ worth of carbon is buried. The layers may still contain ancient frozen microbes, Pleistocene megafauna and even buried smallpox victims. As the permafrost thaws with increasing rapidity, scientists’ emerging challenge is to discover and identify the microbes, bacteria and viruses that may be stirring.

Some of these microbes are known to scientists. Methanogenic Archaea, for example metabolize soil carbon to release methane, a potent greenhouse gas. Other permafrost microbes (methanotrophs) consume methane. The balance between these microbes plays a critical role in determining future climate warming.

Others are known but have unpredictable behavior after release. (source)

Now I am not saying that what happens in the movies will happen just because these microbes are “waking up.”

What I am saying is that (a) we don’t know what is waking up and more importantly, (b) human beings are known to tinker with things in the name of “national defense”, and as a general trend for the future, when men tinker with things, sometimes they tinker with them beyond our understanding and then accident happen that are not intention.

When one puts artificial intelligence, robotics, and a new generation of warfare into this, it makes for an interesting future, or rather, possibly a sort of nightmare that no one can yet foresee.