You are here: Home › JPMorgan Becomes First Major Bank To Formally Declare That US First Quarter GDP Will Decline Because Of COVID 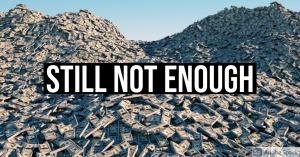 One of the trends that I have been repeating over and over that COVID and the economy are linked in that COVID is being used to take down the US and global economy, and eventually with that the currency by forcing problems to be exposed.

One of the reasons the US “perpetual growth” model is so promoted is because the US needs perpetual financialization to keep her economy going, as the money is based on an unpayable debt with interest scheme run by the Federal Reserve Bank for over a century. The simple idea is that as long as “growth”- real or faked -is happening, there is no reckoning with the debt, and a part of this is- real or faked -GDP growth that is used to support the financial markets.

I have said constantly that at some point, events will happen that will force the debt to be reckoned with, and that will cause chaos leading to global market instability that will have likely political impacts.

Right now, in another step in this direction, JPMorgan has become the first major bank to officially declare that according to CNBC News, the US first quarter GDP will contract because of COVID.

JPMorgan economists now see an economic contraction in the first quarter due to the spreading coronavirus and related restrictions being imposed by states and cities.

The new forecast is a departure from Wall Street’s widely held view that the first quarter would be positive, with an improving economy throughout 2021.

The JPMorgan economists said they expect the economy to expand briskly in the second and third quarter, based on positive vaccine developments.

“This winter will be grim, and we believe the economy will contract again in 1Q,” the economists wrote.

They projected that the first quarter will contract by 1% after growth of 2.8% in the fourth quarter. For the second quarter, they see the economy rallying and growth of 4.5% followed by a robust 6.5% in the third quarter.

The economists also expect about $1 trillion of fiscal stimulus, likely beginning near the end of the first quarter. That should help boost midyear growth.

“One thing that is unlikely to change between 2020 and 2021 is that the virus will continue to dominate the economic outlook. … Case counts in the latest wave are easily surpassing the March and July waves,” the economists wrote.

They noted that the economy was helped through the July outbreak by the economic reopenings. “The economy no longer has that tailwind; instead it now faces the headwind of increasing restrictions on activity. The holiday season — from Thanksgiving through New Year’s — threatens a further increase in cases,” they added.

The economists also expect to see monthly declines in employment at different points over the next few months, but monthly job gains should be back in the millions around the middle of the year and then moderate again late in 2021.

“We think the trends in the labor market should roughly follow what we expect for consumer spending — job growth should weaken noticeably around the turn of the year as the virus weighs on the economy, and then pick up again early next year once vaccine distribution eases virus concerns and fiscal support boosts growth,” they wrote. (source)

This is very important to follow, because as I have repeatedly said, as long as there is debt, there is going to be NO SOLUTION TO THE PROBLEM because THE PROBLEM IS THE DEBT, and if the GDP suffers, it shakes confidence in investments, which causes investment and speculation to drop or become subject to further scrutiny, which forces more questions, which exposes more problems, which shakes investor confidence, and so on.

I don’t want to say that this one act is ‘the’ reason or cause that will trigger a major debt reckoning. Rather, this is a process that happens in small steps, and this is but another step on that path. It is rare to have a major bank make such an announcement, as they are tied to the financial system and have a direct interest in propping it up, so that they are making such a statement does not mean they are being honest out of good will, but that the problems are so obvious there is no way that they can sell a positive investment image to their current and prospective investors unless they acknowledge reality before them. In this case, the reality is that the national economy is suffering, and it is directly affecting major functions of the system itself.

Biden, assuming he becomes president, will likely be forced to print money to cover the economic problems, as this is the only tool that the US has in a practical sense to deal with her debts. If he doesn’t, it means a very bad future for many Americans. If he does, it only drives down the economy further into more of the same debt as well as adds to currency devaluation. It is a no-win scenario.

Turkey And Azerbaijan Want To Unite And Become One Country. Now They Are Building A Railway System To Connect Turkey And Azerbaijan. Could This Railway Be Used To Transport Armenians To Their Deaths?
Joe Biden Does Has Another “Oh No” Moment, Yells At A Reporter Asking Him Questions
Follow