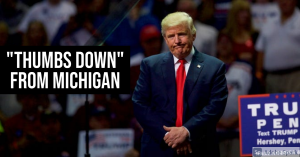 President Trump has presented a particular image of himself, as one who does not let other people mistreat him and speaks his opinions in a very direct and sometimes rude way. However, some people do not like this, and it is possibly this in combination with other factors- not to mention the concerns about the election result process -that tipped the state in favor of Biden over Trump

According to Michigan’s former Republican governor, Rick Snyder, he has declared that he expect Michigan to certify election results in favor of Biden over Trump, who he calls a “bully”.

Calling President Trump a “bully” who is “undermining democracy,” Michigan’s Republican former Gov. Rick Snyder says he fully expects a state board to certify on Monday that Joe Biden won the election in his state, guaranteeing that its 16 electoral votes will be in the former vice president’s column.

But even after that happens, Snyder said in an interview for the Yahoo News “Skullduggery” podcast, he worries about the long-term impact of Trump’s efforts to persuade the Republican leaders in Michigan’s GOP-controlled Legislature to set aside the election results and select an alternative set of pro-Trump electors.

What’s troubling through all this is the president’s behavior — and that of the people on his legal team,” Snyder said. “They’re actually undermining democracy with their actions.

“I’m concerned about the damage that’s going to go on for the next several years in terms of misinformation, creating doubts in the minds of his supporters, things like that,” he said. “There’s a lot of damage. President Trump has done terrible things. This man is the divider-in-chief of our nation.” (source)

There is still controversy over this election, and it is not going to be over for some time. However, there is a clear trend taking place of the Republican party turning against Trump and not supporting, but acknowledging Biden as the informal (in the technical sense) winner.

Trump can fight all he wants, but his chances at victory seem clearly to be diminishing. Likewise, as Snyder noted, the image of the US has suffered gravely on an international level, and this is serious when one considers political trends that, when looked at from a long-term perspective favor a Trump loss so to bring about a Republican makeover of their image, noting the important trend of the Hispanic and Black blocs moving away from the Democrat party, Trump is essentially an expendable wheel in a very large machine. This is not to mention how in spite of all his “wealth”, the man is tremendously in debt, and while he may not (from what it seems) want to leave the presidential office, it may be the best way for him to make a significant amount of money with speaking engagements that can help him pay his debts and live the lifestyle that he is accustomed to.

The final word is yet to be said, but things do not look good for Trump’s tenure in the White House. However, politics is always bigger than any one man, and eventually, it creates the way for a scapegoat (Biden and possibly, Kamala) to be created so that eventually a new political idol can be erected in time to replace Trump, and without much of the controversy that has followed him and caused political damage to the party.