You are here: Home › Scientists Genetically ‘Edit’ Monkey Brains In Utero With Human Genes To Make Them More Intelligent 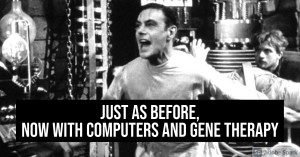 A trend that I have noted before is that of biotechnical engineering and evolution philosophy, where genetics is seen as a way to merge men with animals and machines in the name of ‘creating’ a better man. There are tremendous issues with this including moral, philosophical, ethical, and physical, but the trend in this is so great that it is serving as the basis for arguably a coming Fourth Industrial Revolution, which Klaus Schwab referred to as a ‘merger’ between the three in what works out in a practical sense to be a sort of mutilation of creation, although the scientists do not see it that way, but rather have openly admitted that this process, called singularity, is an attempt to become divine and in the words of Peter Diamandis, “interplanetary space beings”.

However, the practical pursuit of these “goals”, if they can even be called that. often times involves gruesome, disturbing, and dangerous scientific practices that threaten the creation of literal mutants. The New York Post reports on one such development, where scientists claim to have successfully modified the brains of monkeys in utero with human genetics to make them in theory smarter.

Scientists made monkey brains double in size by splicing them with human genes in a “Planet of the Apes”-style experiment.

During the study, Japanese and German researchers injected a gene called ARHGAP11B — which directs stem cells in the human brain — into the dark matter of marmoset fetuses, according to a release about the research.

They found that the primates’ brains soon became more human-like by developing larger, more advanced neocortexes — the area that controls cognition and language, according to the study published in the journal Science in June.

According to images released by the researchers, the modified monkey brains nearly doubled in size at around 100-days into gestation.

“We found indeed that the neocortex of the common marmoset brain was enlarged and the brain surface folded,” said study author Michael Heide.

The neocortex is the newest part of the brain to evolve — one sign that ARHGAP11B may have caused brain growth during human evolution, the researchers said. (source)

The story claims that the cells were aborted and not allowed to grow to full term, but how does one know that?

Experiments such as these are clearly taking place- and probably to much fuller completion -around the world, and they are incredibly dangerous because they are not natural. What I speak of here is not a “Planet of the Apes” type scenario, but rather, one consequence having unintended consequences that explode into something worse.

Many people, including myself, have used the example of a virus that is “modified” to solve a problem or for a perceived good but turns into something terrible that ends up killing those who created it. But there are many other things that could happen. For example, human-mouse chimeras have been made, and who knows what could happen with these things? In the name of trying to ‘perfect’ creation, man is not adding something new, but creating monsters that he really cannot understand, something akin to a Dr. Frankenstein from Shelly or a Dr. Moreau from H.G. Wells.

We are looking into a future that, if trends continue as they are, is more terrifying than exciting, for the current “revolution” taking place is not a revolution, but a mutilation of the human person, and is not lifting man up to “divinity”, but risks dragging him to an animal-like state into a hell created by his own hand.

In Christianity, there is only one true “evolution”, and that is the process of union with Christ, because this transforms a man into his creator not that he becomes the Creator, but that he unites with his Creator, an action known as theosis, or that God became man so that man might become like He who created him. This “evolution” as a trend is the reverse, saying that man ‘advances’ through becoming like things lower than him, either by their existence (such as animals) or because they were created by man, for no creation is greater than its creator.

While the effects of Original Sin are a common theme men following the days of Eden, what we see here is a trend that is essentially Biblical, echoing the words of Wisdom 2, where men seek the good of the present life without any care for the future or union with God, but even moreso, for now man is attempting to use his scientific knowledge to supplant the Creator.

This was already tried one time explicitly in Scripture, with the Tower of Babel, and as it will always happen, the tower crashed and those participants in its constructions were scatters and their languages confused as a punishment. Since one knows that times change but the nature of man does not, nor does truth change, why would a new result be expected even if different tools are used but directed towards the same philosophical end?

It also does not help that German and Japanese scientists are working on this, for last century, their research yielded the atom bomb and the opening of an atomic age. Now, it is things such as this in combination with AI that are fueling a new generation of not just research, but inevitably as all research becomes directed at some point, towards new weaponry.

One can only dare to attempt to imagine what the future holds.

So Much For “The Wall”- Border Crossings Explode, Higher Last Month Than ALL Monthly Crossings Under Obama
Climate Change Threatens Arctic, But This Is Not ‘Global Warming’
Follow