You are here: Home › Hindu Nationalists Call For Christians To Be Denied Economic Benefits 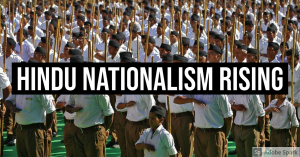 Years ago, Shoebat.com sounded an alarm about India and the future of Christians, saying that given the rise in Hindu nationalism, its direct promotion of racism, and the open hatred of Christ and Christianity, it was only a matter of time before India not only could become one of the worst persecutors of Christians, but may attempt to commit genocide against them, and that if one is a Christian who lives in India, to consider leaving India now while there is still time.

Unfortunately, many of the warnings we feared have come true as now India is consistently in the top ten greatest persecutors of Christians as far as it relates to a nation, and nationalism in the name of Hinduism continues to rise as India attempts to assert herself as a global power and presses against her northeaster neighbor of China in conflicts such as the Ladakh border conflict.

Now according to International Christian Concern, Hindu nationalists are attempting to strip economic benefits from Christians using Hinduism and the Hindu caste system and racialism as a reason.

adical Hindu nationalists in India have launched a campaign to bar Christians from receiving government benefits designed to help economically deprived indigenous people. Christian leaders were quick to condemn this campaign saying it conflated the issues of religion and caste.

“Caste and religion are two different things which can’t be mixed,” Father Nicholas Barla, Secretary of the Indian Bishops’ Commission for Tribal Affairs, told the Union of Catholic Asian News (UCAN). “By birth we belong to a particular caste but religion is one’s choice. People who are campaigning against tribal Christians are ignorant of the Indian constitution.”

Government benefits are given to people from low caste or tribal backgrounds in India to help them overcome generations of caste-based discrimination. However, radical Hindu nationalists view barring these benefits to specifically Christians will stop indigenous people from converting to Christianity.

“Being tribal is by birth but religion is a choice,” Ratan Tirkey, a member of the Tribes Advisory Committee of Jharkhand told UCAN. “Stopping benefits meant for tribal Christians is challenging the constitution and the Supreme Court which clearly state that the [benefits are] meant for poor people and not given in the name of any religion.”

“If it is a case of religion, why are only Christians targeted?” Tirkey continued. “Is it just to harass tribal Christian people who are considered outsiders and anti-government?” (source)

This trend of persecution rising again in India, and with it attempts to revive ancient Hindu practices only recently put to rest such as the caste system are going to be major trends to watch for the future, as they are tied to the geopolitical aspirations and philosophical attempts at creating a Hindustan version of “MAGA”, but rather “MIHE”, or “Make India Hindu Entirely”.

Another trend that should concern Christians is that India’s rise and her persecution of Christians will not be criticized by the US because the US wants to use India as a geopolitical lever against China due to the fact that the two share a similar sized population, are natural rivals, and the US wants to minimize as much work on herself because of the likelihood such as in the Second World War of being in a situation where she has to fight a war in Europe and a war in Asia. It does not matter how much persecution happens- the US will point it out in China but not in India -because she does not care about the Christians, but about political expediency, and talking about Christian persecution in China helps the US but in India it does not and is a political liability.

As such, Christians should note this trend and if they truly want to help, to start working independently now to help Christians in India because they absolutely cannot for any reason expect the US to help them unless conditions change so that it benefits US political interests to do this. This is little different than what happened in the Second World War too, except now, people know much better because of the proliferation of information, and so there is more time to do good before things become terrible.

Climate Change Threatens Arctic, But This Is Not ‘Global Warming’
Angry New Jersey Residents Confront Governor Ignoring His Own Regulations He Is Forcing On The Public
Follow