You are here: Home › Instead Of A ‘Baby Boom’, COVID Isolation With Couples May Generate A ‘Baby Bust’ 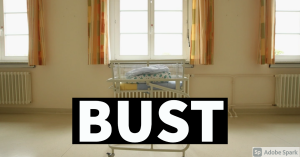 What happens when men and women are left alone together for an extended period? Historically speaking under normal conditions, and barring strong moral or philosophical barriers that are clearly exercised in a consistent way, while one may not see what happens, the proof often comes about nine months later from the woman, which is the gestation time for a child to be born. It does not matter what the race or place is, because in all cases the nature of man is the same.

It is of interest then that right now, couples who are forced to stay at home are not seeing the trend of a “baby boom”, but according to The Atlantic, the opposite, where a “baby bust” is taking place with dropping fertility rates.

y now, the pandemic has disrupted Americans’ daily lives for nearly as long as a baby typically spends in the womb. This means that many children conceived in mid-March are weeks away from joining us in this disorienting new world, but just as notable are the children who won’t be joining us—the babies who would have been born were it not for the ongoing economic and public-health crises.

These missing births, which could end up numbering in the hundreds of thousands in the U.S., will make up what’s been called the “COVID baby bust.”

One would think that a baby bust would take at least nine months to reveal itself, but traces of one seem to have already appeared. As Philip Cohen, a sociologist at the University of Maryland, has noted, births started to decline in California and Florida during the summer. That’d be too soon, though, to reflect a drop in conceptions during the pandemic, or a rise in abortions or miscarriages (which tend to happen earlier on in pregnancy). Three possible explanations, Cohen told me, are errors or lags in states’ data on births, large numbers of pregnant people moving during the pandemic and giving birth in another state, or a large, unexpected drop-off in births that was already going to happen regardless of the pandemic. (source)

This is unfortunate but not a surprise. There are numerous reasons for why this has happened. However, it can be easily explained by a look at society, which is that the US truly is from all historical trends and empire in decline.

In the 1960s, scientist John Calhoun conducted the infamous “mouse utopia experiment” where he created a “utopia” for Norway rats, but found that with no purpose to struggle to live, eventually the rats turned against themselves and started to self-destruct. While Calhoun’s experiment is sometimes use to advocate for eugenic policies, a positive conclusion that can be taken from it is that great societies do not die from the fault of others, or for a lack of something. Rather, they die from their own internal behavioral choices that result in their destruction. In the case of human beings, this would not seem to be material needs, but a lack of purpose and place in the world.

Right now, what does it mean to be an American? What does one hope to look forward to? Indeed there is much hope if one looks closely, but due to a never-ending expansion of laws, taxes, work that requires far more effort for far fewer wages with little to no stability, and living a life that is tenuous where one’s place is defined by one’s advancement in position that can seldom if ever hope to be attained with the fact that God is not believed in by many save for as an extension of oneself, many people see no purpose to life. COVID has only exposed this, for while the restaurant-eating, entertainment-consuming American of the modern era could placate himself with sensual pleasures, those being limited access to him by COVID have helped to expose the ugly reality of what has been taking place for a long time and what few want to discuss.

People do not want to children not because they are not having sex- there is plenty of energy being spent on pleasure. What is not happening is reproduction, because people do not want to reproduce because for many, having children is an extension of themselves like what they learned from previous generations, if one’s pleasures are limited right now, why have a child when knowing that children will limit one’s access to them further?

It is fundamentally selfishness that is consuming the nation, just as those who yell about “those Hispanics” who cross illegally but have two to three children- a number still low by historical standards but higher than the average American -will also not have children themselves and then wonder why they are being demographically replaced with another group that has more children. The Millennials and Zoomers are only continuing this trend, and even more than what their parents already did.

It is also not that these problems are unfixable. They are very much able to be fixed, and it is as simple as living a normal life. However, it is a sad thing to note that the abnormal has become normal, and what is normal in the objective sense is now, generally speaking, an abnormal thing.

Thus couples will stay together in their homes, they will engage in relations, but they will not have children, because they do not want to have them. Instead of living for the future, they are living for the day, and it is coming at the cost of the future.

This same problem exists in Europe, and even more so. It is in both Western and Eastern Europe, and the only reason why there are not more problems openly showing in Eastern Europe is because of the lack of immigration, generally speaking, to those parts with the exception of Russia, but it is as just as serious and is not going away, and will be forcibly and in a very ugly way exposed. Likewise, the solution to these problems are the same, which is to have faith in something greater than oneself and one’s own presence in this world, and also to express that through what one consumes and one’s family choices.

There is always hope, even for the US. However, to fix the problems will require serious solutions that are very much able to be done. The problem is that men do not want to avail themselves, and that is why from a trend viewpoint, the same problems will continue until they become much more serious and a fundamental change is forced by the circumstances themselves.