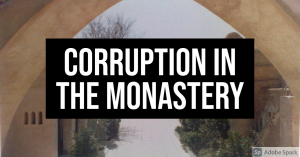 In August 2018, Shoebat.com reported on the curious case of a murder in Egypt involving a Coptic bishop and two monks. You can read our full story here, but after looking at the case, this was not a simple case of anti-Christian violence, or even outright corruption from the Egyptian government, but seems to have exposed through the act a situation of rampant corruption in the Coptic Orthodox Church but of an undisclosed nature.

Two years later, one monk accused of being involved in the incident was sentenced to life in prison, and the other is sitting on death row, following accusations corroborated by testimonies and other evidence from human rights groups that the “confessions” of the monks involved were obtained under severe torture, with consistent contradictions from the government in their evidence produced.

However, as the Greenwich Times reports, there has been a strange silence from the Coptic Orthodox Church over the matter, which has defrocked the monk on death row without explanation and without investigation.

When a judge saw him, he ordered that Isaiah be taken to a hospital. But Isaiah later said that security agents forced a nurse to state that he was medically fit, according to video of his testimony seen by The Post. Isaiah also said he was accused by his interrogator of having inappropriate sexual relationships and that the bishop had learned of these, creating another motive.

“I told him if he wants to frame me, then I am a womanizer, but I could never kill,” Isaiah told the court.

The dispute between Isaiah and the bishop revolved around accusations that the monk was improperly carrying out business deals in the name of the monastery. But the dispute had been settled six months earlier, Azer said, adding that “most witnesses said the dispute wouldn’t have made Isaiah kill the bishop.”

A key witness, whom Isaiah’s family thought would support his case, was mysteriously transferred to another monastery, Azer said. Two days later, he was found dead in his monastic cell, possibly poisoned. There also were prison inmates who could have testified to Isaiah’s torture, especially an extended period in which he was denied the use of the bathroom as well as the use of electric shocks on him, Azer said. No investigation was carried out into the inmates’ allegations of torture, Azer said.

In June, Reprieve released a statement on behalf of the monks saying that “the only evidence against them are bogus ‘confessions’ extracted through torture.” It added that “the two men have been put through patently unfair trials and there are grave doubts as to their guilt.”

The following month, an Egyptian court affirmed the death sentence against Isaiah and the life sentence for Faltaous. The hearing lasted 15 minutes.

The Coptic Church offered no legal aid. Days after the killing, before he was formally charged, the church defrocked Isaiah without an internal investigation, according to his relatives.

“My brother was arrested after the church abandoned him at a sensitive time,” said Samuel Saad Tawadros, the brother of Isaiah. There are a lot of question marks. Why defrock him at this moment?”

Human rights activists and the monk’s relatives allege that the church is worried that a prolonged legal proceeding would unearth potentially embarrassing secrets and internal tensions that could damage the church’s image and credibility with millions of its followers.

Reprieve brought the case to the attention of human rights officials in the European Union and the United Nations. Both institutions are monitoring the monks’ case. But in the current climate, fear is growing that time is running for Isaiah.

“It seems there is a secret deal between the church and the security that this case should be closed as fast as they can,” Azer said. “If the death sentence is carried out, he is done, killed and silenced forever.” (source)

One of the trends that I have pointed out in the Catholic Church is that of strong tensions between warring factions. This is, one might say, a reflection of a battle between Good and evil that takes place all around us but is most intense in the Church, and for Scriptural reasons, for as She is the Church that Christ founded, it only makes sense that the center of the war would be fought in Her.

Likewise, it also reflects the trend that one can see in that what happens in the Catholic Church goes on in other Churches, the difference being that in the Catholic Church, scandals often come out fast and in unsavory ways for all to see and criticize. However, from a Christian theological view, this is a blessing, as exposure to light allows for cleaning and healing, as the old saying consistently goes that “sunlight is the best disinfectant.”

The question that must be asked here is, why is the Coptic Church so silent? This is an obvious case of abuse, and yet they refuse to say anything to help a fellow monk. It is strange, and the more silent, the stranger things become for those looking into it.

It reminds me of the case of Fr. Gordon MacRae, which I have written about before. The priest, who blogs by way of letters from his cell with the help of his supporters at These Stone Walls, was falsely accused of sexual abuse, convicted, and sent to prison for thirty-two years, of which he has already served over twenty years. His story has attracted international media attention consistently, of which numerous investigations, including one conducted by famed Wall Street Journal journalist Dorothy Rabinowitz, that
MacRae is innocent of the charges, to which the state of New Hampshire has ignored and the Archdiocese of Boston has refused to help.

In the MacRae case, it is of note that about a decade after his conviction was when the sexual abuse scandal in the Church was exposed beginning with corruption in the Boston Archdiocese, which is notoriously filled with terrible corruption. This has since exploded around the world with crimes committed by members of the Church hierarchy. However, the Boston Archdiocese has said nothing of MacRae, and even in the case of many abuse victims, there has been a consistent pattern of “stonewalling”, where members in the hierarchy will remain silent and say nothing except unless forced with great effort by the courts.

Going back to that story in Egypt, and noting the above examples, one must wonder if a similar situation, be it of a morally explicit nature, illegal business deals, collusion with the Egyptian government in an immoral way, or something else may be “exposed” by these monks, all of which would be not surprising examples to provide an explanation for why the Church seems to refuse help to him, that as the Greenwich Times notes, he is preferred to be dead, because as the old saying goes, “dead men tell no tales.”

One does not know what happened for sure, or what exactly are issues in this case. What one does know is that the trends of ecclesiastical corruption and sins are not just unique to the Catholic Church, but all Churches, and if they are not exposed by the grace of God to be healed, as painful as it could be, then men’s actions will force them exposed, and a fallen man turned away from God will seek justice without mercy in a process more terrible than if it was just exposed earlier.

Thanksgiving 2020 Is Almost 10% More Expensive Than In 2019, And Being Thankful Now And In The Future
As Americans Lose Their Jobs, Robots Take Their Place
Follow