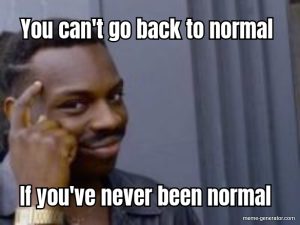 There is a song that I find quite annoying called “Have Yourself A Merry Little Christmas”, for the vapid lyrics combine with trite expressions an meaningless statements to form an excuse for a musical piece that is a reflection of a pagan “Yuletide” more than a Christmas celebration. One of the lines, however, stands out in that song to me, and no less frustrating, which is “next year now our troubles will be far away.”

This is a tune that many Americans are singing with hope, as according to a recent study reported on by StudyFinds, 80% of Americans hope that 2021 will see a return to “normal.”

There’s no question 2020 has been a rough year for many people. A new survey finds eight in 10 Americans are desperate to hear some positive news before the year ends.

The study asked 2,000 people about ways they’ve coped with the stress of 2020 and COVID-19. The results find 75 percent said the constant stream of bad news has taken a toll. Seven in 10 respondents have made it a priority to do something positive every day as quarantine continues.

Conducted by OnePoll on behalf of Vitamin Angels ahead of Giving Tuesday, the survey reveals the top goal for those polled is just to make at least one person smile every day. Another 34 percent are trying to make someone laugh daily as well as make it a priority to share positive news with their loved ones.

When respondents need some cheering up themselves, their recipe is turning on their favorite movie (46%) and eating their favorite snack (43%). Forty-three percent of respondents also go for a walk, four in 10 call a friend and 38 percent snuggle up with their pet.

One in four also shared they sing in the shower for a pick-me-up while 19 percent even have a solo dance party to get in better spirits. Thirty-eight percent of those surveyed also shared they’re donating to local charities to foster positivity and 28 percent are finding a safe way to volunteer.

Nearly six in 10 Americans say the difficulties of 2020 and COVID-19 has led them to give back to their community even more. Two in three (66%) agree that their communities are closer than ever. Despite the stress of COVID life, 78 percent of respondents agree the pandemic has made it more important than ever to give back to their local communities.

Now I hate to be the one to bring “bad news” to the party, but the chance of a “return to normal” in 2021 is extremely abnormal.

Make no mistake, I am not saying that COVID will last forever, or that possibly it won’t end next year. What I am saying is that COVID set in motion a series of changes that are not going to be stopped because it forced the economic “can of worms” opened. The biggest problem and the one word that can summarize all the problems is “debt”, but it is a chain reaction of debt that stretches from the “man on the street” to the most powerful businesses an everything in between. Basically, everybody is in too much debt and with no way to pay it, and the chance of it causing a chain reaction of defaults that affect larger and larger economic blocs is very likely. When one combines this with the dollar an overprinted currency backing the global economy and that the US has no way ever to pay her debts, it is a nightmarish scenario that is setting up, which as I have noted, could mean the crash of the global economy, an as economics precedes politics, could cause a chain reaction of political instability with the potential to lead to global conflict.

COVID may go away, but “the party” is not coming back. For those who paid attention or understand the events of recent history, the “party” stopped finally in 2007 with the first debt crisis, and the inevitably economic reckoning that should have happened then and would have been able to clear out many of the current problems- albeit with some pain -was not allowed to happen, and instead, the government printed money through the TARP program.

Now, after over a decade of continual printing, the same situation is still here, only amplified many times over by the expansion of debt. However, the same money printing will not yield the same effects as in 2007, for instead of servicing debts with some debasement to the currency, it will be more likely to debase the currency and drive up prices, which while it will pay debts, will force more debts in the future because of prince increases due to a loss of value in the means of exchange itself.

Hope for a better future is a good thing, and there is much hope. However, false hope is as dangerous as it is unhelpful, and given the very difficult situations facing the US and the world in the coming years, there is no point in hoping for a “return to normal” that not only was never “normal” in the historical sense, but lead the the current abnormalities. Likewise, for those who can help others, now is good, but the future will become even more important since there is most likely going to be a lot more in the future that people will need help with.